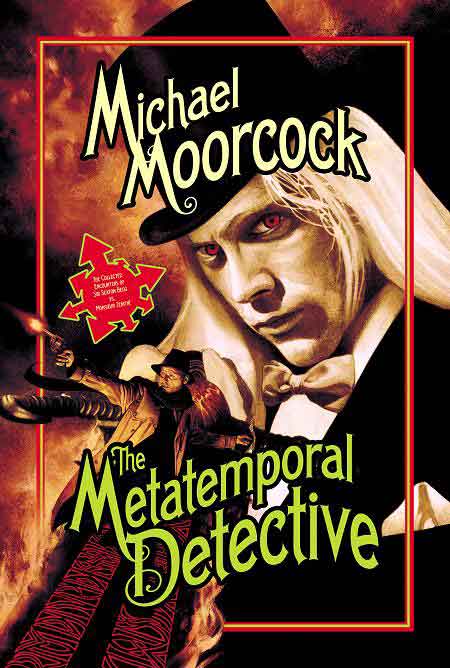 Collected for the first time, eleven tales of Sir Seaton Begg vs. Count Zodiac, including the never before seen "The Flaneur of the Arcades d'Opera."

Seaton Begg and his constant companion, pathologist Dr "Taffy" Sinclair, both head the secret British Home Office section of the Metatemporal Investigation Department — an organization whose function is understood only by the most high-ranking government people around the world — and a number of powerful criminals.

Begg's cases cover a multitude of crimes in dozens of alternate worlds, generally where transport is run by electricity, where the internal combustion engine is unknown, and where giant airships are the chief form of international carrier. He investigates the murder of English Prime Minister "Lady Ratchet," the kidnaping of the king of a country taken over by a totalitarian regime, and the death of Geli Raubel, Adolf Hitler's mistress. Other adventures take him to a wild west where "the Masked Buckaroo" is tracking down a mysterious red-eyed Apache known as the White Wolf; to 1960s' Chicago where a girl has been killed in a sordid disco; and to an independent state of Texas controlled by neocon Christians with oily (and bloody) hands. He visits Paris, where he links up with his French colleagues of the Sûreté du Temps Perdu. In several cases the fanatical Adolf Hitler is his opponent, but his arch-enemy is the mysterious black sword wielding aristocrat known as Zenith the Albino, a drug-dependent, charismatic exile from a distant realm he once ruled.

In each story the Metatemporal Detectives' cases take them to worlds at once like and unlike our own, sometimes at odds with and sometimes in league with the beautiful adventuresses Mrs. Una Persson or Lady Rosie von Bek. At last Begg and Sinclair come face to face with their nemesis on the moonbeam roads which cross between the universes, where the great Eternal Balance itself is threatened with destruction and from which only the luckiest and most daring of metatemporal adventurers will return.

"During a much-storied, 40-year career penning dark sf and cross-genre fantasy, Moorcock has always found time for the odd visit with Sir Seaton Begg, metatemporal detective extraordinaire. Collected here for the first time are Begg's complete criminal inquiries conducted under the auspices of the supersecret Metatemporal Investigation Department and accompanied by discriminating, Watsonian sidekick Dr. Taffy Sinclair….Moorcock's penchant for potboiler violence and archvillains, including the mysterious Zenith the Albino, takes most of these stories into the realm of parody....Yet the detective's unique and outlandish time-jumping adventures reliably supply amusing, if fluffy, diversion."
—Booklist

"Moorcock's storytelling is impeccable, his humor both arch and to the point. Most libraries should consider adding this themed short story collection to their holdings."
—Library Journal

"Put out in a gorgeous hardcover edition from Pyr, featuring the art of World Fantasy Award winner John Picacio, this collection of short fictions will entertain anyone who loves wild imagination wedded to impeccable storytelling, along with liberal doses of humor and suspense….another example of the range and depth of Moorcock's prodigious talent."
—Omnivoracious (Amazon.com Book Blog)

"[A]n entertaining collection of short stories that are highlighted by controversial figures, engagings dialogues, vivid landscapes and enigmatic characters. Moorcock does an excellent job of creating engaging mysteries that kept me guessing until the very end. If you are a fan of mystery and intrigue, I would recommend checking out this book. If you are a fan of Michael Moorcock's Elric saga, then this book is an absolute must read and if you don't pick it up, you should be ashamed of yourself!"
—The Fantasy Review

"My immediate impression of Moorcock's writing was one of awe and appreciation for someone who clearly is a master of language. The writing was an absolute joy to read while never becoming flippant. In mere moments, the mood was set and characters brought to life. This man knows how to write….While some are more memorable than others, there isn't a bad story in the bunch. Moorcock demonstrates his mastery of language, sets the mood, and takes the reader on a trip through the multiverse, guided by the great metatemporal detective, Sir Seaton Begg. The Metatemporal Detective is one of the more enjoyable books that I've read in a while"
—Neth Space

"If you are at all interested in fantastic fiction, you must read Michael Moorcock."
—Tad Williams, author of Shadowmarch

"One of our topmost novelists."
—Kirkus Reviews

"His characters persevere, and their fulfilling tales of strife and survival
prove ultimately engaging."
—Publishers Weekly

Michael Moorcock is a highly respected author who has won many awards over his prolific career. The author of many literary novels and stories in practically every genre, he has won and been short-listed for the Nebula, World Fantasy, Hugo, August Derleth, Booker, Whitbread, Guardian Fiction Prize, and others. His novella Behold the Man won the Nebula Award. Currently he resides in Texas with his wife, Linda.