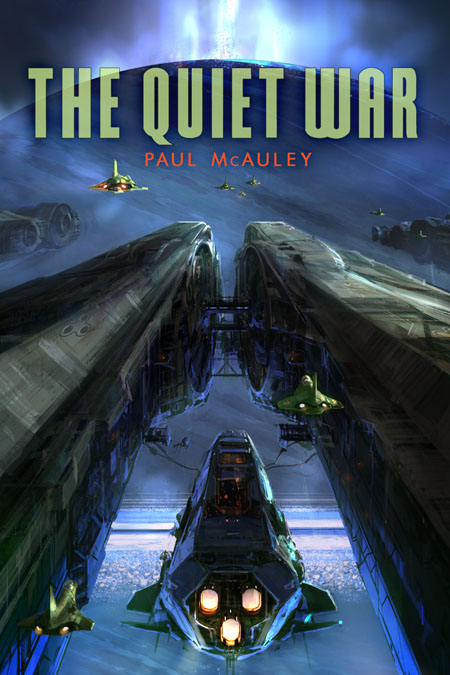 From the teeming cities of earth to the scrupulously realized landscapes of the moons of Jupiter and Saturn, The Quiet War, an exotic, fast-paced space opera, turns on a single question: who decides what it means to be human?

Twenty-third century Earth, ravaged by climate change, looks backwards to the holy ideal of a pre-industrial Eden. Political power has been grabbed by a few powerful families and their green saints. Millions of people are imprisoned in teeming cities; millions more labour on Pharaonic projects to rebuild ruined ecosystems. On the moons of Jupiter and Saturn, the Outers, descendants of refugees from Earth's repressive regimes, have constructed a wild variety of self-sufficient cities and settlements: scientific utopias crammed with exuberant creations of the genetic arts; the last outposts of every kind of democratic tradition.

The fragile detente between the Outer cities and the dynasties of Earth is threatened by the ambitions of the rising generation of Outers, who want to break free of their cosy, inward-looking pocket paradises, colonise the rest of the Solar System, and drive human evolution in a hundred new directions. On Earth, many demand pre-emptive action against the Outers before it's too late; others want to exploit the talents of their scientists and gene wizards. Amid campaigns for peace and reconciliation, political machinations, crude displays of military might, and espionage by cunningly wrought agents, the two branches of humanity edge towards war...

"McAuley is one of our most versatile and talented SF writers. He's created space opera in the grand tradition... he's made himself at home with the tale of the far future. Only Gene Wolfe and Jack Vance have done it as well!"
—Publishers Weekly

"The fascinating inventiveness of the bio-engineered life-forms, the intricate detail of both the societies and habitats, the complex characters all amounted to a fabulous story. This is a book that has been carefully thought out and the author displays a wealth of knowledge on subjects such as bio-remediation and terraforming. It's a tale well worth taking the time to get into and enjoying McAuley's vision of the future."
—SF Crowsnest

"The author creates a magnificent sense of gravitas and wonder as he describes conflict. The ideas expounded are genuinely fascinating and well thought out. The stage is set for war and it is beautifully handled."
—Sci Fi Now

"It's a complex, multilayered novel, almost an SF version of 'Bleak House' or 'Bonfire of the Vanities'. It's packed with great characters, breathtaking set pieces and intriguing SF ideas."
—SFX

"With restrained brilliance, McAuley takes that hardy SF perennial, the interplanetary war, and shows us how one might actually develop. This novel shows off many of McAuley's strengths—his solid plotting, his command of scientific theory, his sense of the complex moral and political implications of each advance."
—Deathray

"Combines the damn-the-torpedoes, full speed ahead narrative impetus of a Peter F. Hamilton, with the detailed, even meticulous attention to world-building and character development that distinguished Kim Stanley Robinson's classic Mars sequence. McAuley has always been a stylish writer, but he outdoes himself here. The Quiet War marks Paul McAuley's triumphant return to full-bore space opera."
—Locus

Paul McAuley's first novel won the Philip K. Dick Award and he has gone on to win almost all of the major awards in the field. For many years a research biologist, he now writes full-time. He lives in London.