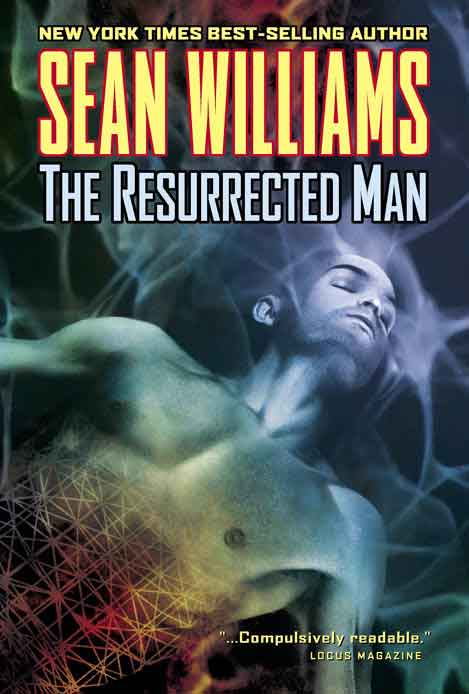 Private detective Jonah McEwen is wanted for murder. Someone has been killing women who resemble Marylin Blaylock, his former colleague and ex-lover. The latest grisly discovery is right on his doorstep. He is the obvious suspect.

The problem? He has been in a coma for three years - a coma he has no memory of entering. And there's worse to come.

Using matter transporter technology, or "d-mat," a serial killer know only as the Twinmaker has been brutally torturing and killing perfect facsimiles of his victims and leaving the originals alive. As legal arguments rage about whether this even constitutes murder, Jonah finds himself in the awkward position of defending his innocence when his own exact copy might actually be guilty.

Set in a time where the lines between human and machine are increasingly blurred, The Resurrected Man explores the future of terrorism, law enforcement, and globe-spanning conspiracies. A perfect blend of suspense and science fiction, the novel follows the complexities of Jonah and Marylin's relationship and their quest to find the killer before he strikes again, as well as unravelling the tensions between Jonah and his father - a man who has been dead for three years but who might yet hold the key to everything...

Nominated for the Aurealis Award and winner of the Ditmar Award, The Resurrected Man was hailed as a "tour de force" in Australia, the author's home country, and described as "compulsively readable" by Locus.

"[A] murder mystery of the science fictional sort...a story-line that would pull readers of thrillers or detective novels through what is otherwise a very well-written and very well-extrapolated science fiction novel set in a very complex and well-realized future...written with the considerable style, panache, and attention to the inner life of the detective in question that one has come to expect in high-end noir."
—Asimov's Science Fiction

"... takes a simple science fiction premise — a matter transporter — and uses it as a springboard for lots of cool and thought-provoking ideas ... a first-rate sf murder mystery that's sure to get you thinking about the implications of technology."
—SF Signal

"An enticing mélange of futuristic science fiction and hard-boiled murder mystery, Sean Williams's The Resurrected Man (winner of the Ditmar Award for Best Australian Novel of 1999) is finally available for the first time in the States ... Set in a paranoia-powered dystopia vaguely reminiscent of Philip K. Dick's 1968 classic Do Androids Dream of Electric Sheep? and George Orwell's 1984, The Resurrected Man is one of those rare genre-transcendent novels that will appeal to science fiction, mystery, mainstream, and literary fiction fans alike."
—B&N Explorations

"When matter transmission booths are finally invented, no doubt certain children will instinctively fear stepping into them. The Resurrected Man magically prefigures those childhood terrors of tomorrow, resulting in a police procedural that is unblinking, noirish, and gnawingly compelling."
—Scott Westerfeld, author of The Risen Empire

"Like all good science fiction, this novel raises important questions, without dictating specific answers. It is compulsively readable."
—Locus

"Sean Williams is one of the best writers of future noir thrillers around."
—Cheryl Morgan, Emerald City

Sean Williams is the author of numerous works for adults, young adults, and children, covering new space opera, science fiction thrillers, fantasy, and horror. He has also written for Star Wars and Doctor Who, two franchises he has loved since a child. A winner of the Writers of the Future Contest, recipient of the "SA Great" Literature Award, and a New York Times best seller, he lives with his wife and family in Adelaide, South Australia.