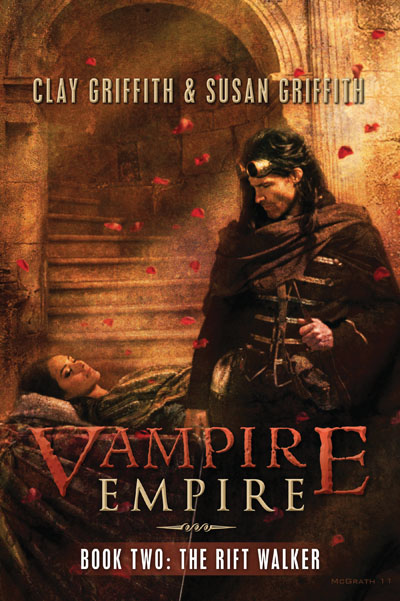 Princess Adele struggles with a life of marriage and obligation as her Equatorian Empire and their American Republic allies stand on the brink of war against the vampire clans of the north. However, the alliance's horrific strategy for total victory drives Adele to abandon her duty and embark on a desperate quest to keep her nation from staining its hands with genocide. Reunited with her great love, the mysterious adventurer known to the world as the Greyfriar, Adele is pursued by her own people as well as her vengeful husband, Senator Clark. With the human alliance in disarray, Prince Cesare, lord of the British vampire clan, seizes the initiative and strikes at the very heart of Equatoria.

As Adele labors to bring order to her world, she learns more about the strange powers she exhibited in the north. Her teacher, Mamoru, leads a secret cabal of geomancers who believe Adele is the one who can touch the vast power of the Earth that surges through ley lines and wells up at the rifts where the lines meet. These energies are the key to defeating the enemy of mankind, and if Princess Adele could ever bring this power under her command, she could be death to vampires. But such a victory will also cost the life of Adele's beloved Greyfriar.

The Rift Walker is the second book in a trilogy of high adventure and alternate history. Combining rousing pulp action with steampunk style, the Vampire Empire series brings epic political themes to life within a story of heartbreaking romance, sacrifice, and heroism.

"Top pick! Vampire Empire is one of the best fantasy series I've read, set in a
unique postapocalyptic world. The landscapes, the peoples, and the incredible
gizmos will attack your senses. Their unforgettable characters will stay with
you as the tale unwinds."
—RT Book Reviews (four and a half stars)

"The Rift Walker is an exhilarating burst of adventure and romance that will leave you smiling, laughing, breathless—and utterly swept away. I love this book so much."
—Marjorie M. Liu
New York Times bestselling author of the
Hunter Kiss and Dirk & Steele series

"I've said it before and I'll say it again: The future of genre fiction is now – and it's Clay and Susan Griffith's Vampire Empire trilogy."
—Explorations: The BN SciFi and Fantasy Blog

"The Vampire Empire series stands out because of its unabashed steampunk leanings and that is both great fun and a refreshing direction for the genre. It creates a world where science (albeit steampunk science) and magic clash head on and this is a major theme of this volume as Adele taps into her powers… I really enjoyed the first book; however I loved the second. The story built apace and left me eagerly anticipating the final part. 8 out of 10."
—Taliesin Meets the Vampires

"The Vampire Empire series is becoming one of my favorite all time series. If you haven't read these books yet, I strongly recommend them. I know there are a lot of vampire books out there but this series sets itself apart from the rest. I can not say enough about this book. The first book blew me away and the second did it again. I absolutely love this series and I can't wait for the third book to come out."
—2 Read or Not 2 Read blog

"I loved The Rift Walker. Clay and Susan Griffith can tell a good story that includes an exciting, fast paced battle, political intrigue, tender romance with believable technology and paranormal aspects. The only thing I didn't like about this story is that I have to wait for the next book to come out!"
—Literary Escapism

"The sequel has a hundred extra pages to tell its story over the first book in the Vampire Empire series and they are packed with more locations, more political intrigue, more vampire mythology, more romance, and the same rich characters who captivated me in The Greyfriar…there is still plenty of action and intrigue that evokes the old pulp novels of the past, dashing and daring adventure though exotic locations, and sweeping romance between these star crossed lovers."
—All Things Urban Fantasy
( also posted on GoodReads, Amazon, and Library Thing)

"The Griffiths…offer us what we came looking for: unrelenting action, adventure, romance and a fair bit of magic. There really is something for everyone here, and this, I think, really is the what makes the Griffiths' writing so endearing…. At the end of the day though, what I keep reading 'Vampire Empire' for, and what I imagine a lot of other readers keep reading these books for, is the all out epic entertainment they provide. In this respect, The Rift Walker really outdoes the first book, providing us with devilish conspiracies, all-out war on a reclusive vampire clan, airship chases, betrayals, heroics and complicated affairs of the heart, all told from a massive, epic scope….[The Griffth's] continued mixing of tropes from steampunk, epic fantasy, urban fantasy and adventure is still refreshing and proof of how a bit of innovation - even in a purely gratuitous entertainment sense - can bolster a novel's quality. If you haven't yet gotten in on the Griffiths' highly enjoyable, highly diverting 'Vampire Empire' trilogy, I suggest you do so now. No matter what genre background you have, I can almost guarantee you'll find something to your liking here."
—LEC Book Reviews

PRAISE FOR THE GREYFRIAR, VAMPIRE EMPIRE BOOK ONE:

"I love this book. It's epic and lovely, heartbreakingly romantic
(in every sense of the word), and an incredibly satisfying read, both for
the characters and for the richness of the world."
—Marjorie M. Liu

"I absolutely loved The Greyfriar . . . and literally couldn't put it down. . . .
It's simultaneously alternate history, epic adventure fantasy, apocalyptic horror, and heartrending romance. With a storyline powered by steampunk sensibilities and an audacious tone reminiscent of the Golden Age adventure pulps . . .
this novel was simply a brilliant amalgam of genre elements. . . .
The Greyfriar is so much more than a vampire novel. . . . The future of genre
fiction is now—and it's Clay and Susan Griffith's The Greyfriar."
—Explorations: The B&N SciFi and Fantasy Blog

"I was blindsided by how phenomenal The Greyfriar was from start to finish. Amazing vampire mythology, a chilling alternate history, and a poignant romance that grips your whole heart and refuses to let go. . . . The action is exhilarating, the vampires are refreshingly sinister, and the love story a gentle force so captivating that I truly believe it will weather even the most daunting obstacles. Book two in the Vampire Empire can't come soon enough. My rating: 5/5, Near Perfect—Buy two copies: one for you and one for a friend."
—All Things Urban Fantasy

" I am totally and completely enthralled with The Greyfriar. The style of this book is eloquent, creating such a beautiful world and story with just words. . . . If I had book two right now, I'd immediately start reading. This is one of my 2010 best book picks and I cannot recommend it enough."
—A Tale of Many Reviews

Clay and Susan Griffith are the authors of The Greyfriar, Vampire Empire Book One. The Griffiths are a married couple who have written and published together for more than a decade. Their credits not only include two novels for Bantam Doubleday Dell in the mid-1990s and another novel for Pinnacle Entertainment Group in 2002 but also numerous short stories published in many anthologies, some featuring noted genre characters like Kolchak the Night Stalker and the Phantom. They've also written scripts for television and published graphic novels. The authors have attended many cons multiple times over the years, including World Fantasy, WorldCon Science Fiction, ComicCon (San Diego), DragonCon (Atlanta), HeroesCon (Charlotte), and other smaller conventions. These are two hardworking authors, in every sense!