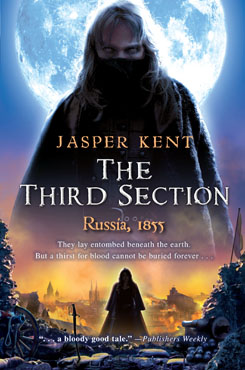 Russia 1855. After forty years of peace in Europe, war rages. In the Crimea, the city of Sevastopol is besieged. In the north, Saint Petersburg is blockaded. But in Moscow there is one who needs only to sit and wait – wait for the death of an aging tsar, and for the curse upon his blood to be passed to a new generation. As their country grows weaker, a man and a woman—unaware of the hidden ties that bind them—must come to terms with their shared legacy. In Moscow, Tamara Valentinovna Komarova uncovers a brutal murder and discovers that it not the first in a sequence of similar crimes, merely the latest, carried out by a killer who has stalked the city since 1812. And in Sevastopol, Dmitry Alekseevich Danilov faces not only the guns of the combined armies of Britain and France, but must also make a stand against creatures that his father had thought buried beneath the earth, thirty years before.

"With a feel for both Russian history and storytelling, Kent (Twelve) continues his alternate history of the Russian Empire, blending fact with dark fantasy that results in an offbeat and gripping vampire tale. Capturing the essence of the nineteenth-century Russian novel, this richly detailed book will appeal to Russophiles as well as fans of vampire fiction."
—Library Journal

"Having loved the first two installments in the Danilov Quintet, expectations were rather high for this one. And I'm happy to report that Jasper Kent delivers yet again! Vampire stories are a dime a dozen in this day and age, most of them with nothing original to differentiate them from the rest of the pack. Yet by mixing his tale with Russian historical fiction, Kent created something unique, compelling, and thoroughly enjoyable."
—Pat's Fantasy Hotlist

"Kent's sprawling historical horror debut . . . brings blood-gushing brutality back to vampire fiction. . . . [Character] self-examination doesn't impede densely detailed, hard-driving action . . . and the vampires are genuinely scary villains, more vivid than most of the living characters. With no romantic yearning or teen angst in sight, this is just a bloody good tale."
—Publishers Weekly

"Jasper Kent has created an amazing historical recount with the added mix of horror, betrayal, and love. His attention to detail is outstanding. . . . I was left every night not wanting to put the book down. . . . The twists and turns in Aleksei's journey are filled with brotherhood, compassion, betrayal, anguish, guilt, and love. . . . If you are a fan of vampire stories, and are tired of sparkles and lovey-dovey vamps, Twelve is a must read! Hell, I love the lovey-dovey sexy vampires and I really enjoyed this book."
—Literary Escapism

"A gang of bloodthirsty vampires operating as partisans against the invading French army, both in its investment of Moscow and in its long, and long-suffering, retreat—I don't know about you, but that setup makes my mouth water. . . . The moral dimension of the novel flowers—and it's that dimension which really distinguishes this book from typical vampire fare… Twelve is a strong and original debut by a talented young writer who brings fresh psychological and moral sophistication to his subject."
—Realms of Fantasy

"Kent has magically blended history, folklore, and storytelling to produce a superb account of the Dekabrist revolt. Thirteen Years Later should please fans of all three. The third in the series [The Third Section] is set during the Crimean War, and expected to exercise the same fascination."
—Booklist, starred review

"The prose summons a feeling of Russia, or at least a Russia I imagine from films and prose that have emerged from that country—giving the whole book a feeling of authenticity. The characters are well rounded, all flawed in their own ways, with a villain of the piece who is truly fascinating. . . . This is a great read and a fantastic addition to the genre. 8 out of 10."
—Taliesin Meets the Vampire

Jasper Kent was born in Worcestershire, England, in 1968. He attended King Edward's School, Birmingham, and went on to study natural sciences at Trinity Hall, Cambridge, specializing in physics. Jasper has spent almost twenty years working as a software engineer in the UK and in Europe, while also working on writing both fiction and music. In that time, he has produced the novels Twelve, Thirteen Years Later, Yours Etc., Mr. Sunday, and Sifr, as well as cowritten several musicals, including The Promised Land and Remember! Remember! Jasper lives in Brighton, where he shares a flat with his girlfriend and several affectionate examples of the species Rattus norvegicus. Visit Jasper Kent's website at www.jasperkent.com