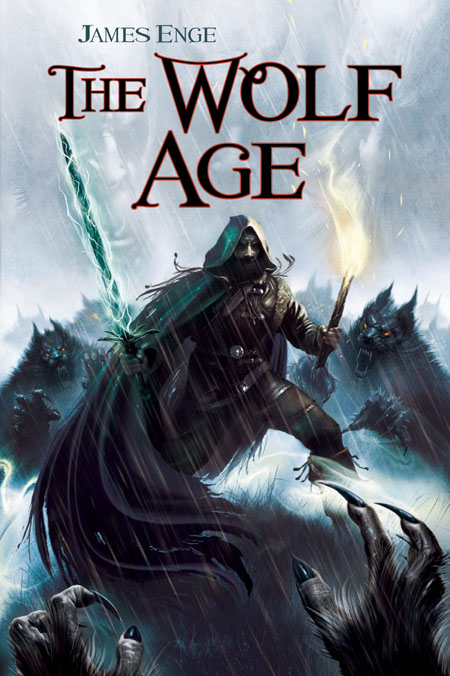 Wuruyaaria: city of werewolves, whose raiders range over the dying northlands, capturing human beings for slaves or meat. Wuruyaaria: where a lone immortal maker wages a secret war against the Strange Gods of the Coranians. Wuruyaaria: a democracy where some are more equal than others, and a faction of outcast werewolves is determined to change the balance of power in a long, bloody election year.

Their plans are laid; the challenges known; the risks accepted. But all schemes will shatter in the clash between two threats few had foreseen and none had fully understood: a monster from the north on a mission to poison the world, and a stranger from the south named Morlock Ambrosius.

"…what Tolkien might have written had he lived in this postmodern age."
—Grasping for the Wind

"Werewolves clash with legends in the harrowing and beautiful third novel (after 2009's This Crooked Way) detailing the epic travels of enchanter Morlock Ambrosius. Following a string of bad luck, Morlock is incarcerated in the werewolf fortress of Vargulleion. ...Enge's elegant prose perfectly captures Morlock's terse and morbid nature, which thrives in the vicious, honorable werewolf nation. Numerous intimate, complicated, and contentious relationships provide depth and gravity to the grim tale, which will enthrall fans of the dark and sinister."
— Publishers Weekly starred review

"Enge twists science through arcane skills that allow matter and life to be manipulated in a logical fashion. Very cool stuff, in my opinion…
Enge has created a story that I wanted to finish. I wanted to know how
things would turn out, and I enjoyed Enge's juxtaposition of loyalty with Morlock's harsh world. The Wolf Age is a very solid book."
—Fantasy Literature

"Inventive and delightful... [I] promptly tracked down the earlier [Morlock Ambrosius] titles, Blood of Ambrose and This Crooked Way, because I enjoyed this one so much… Enge's plot is admirably twisty, and he keeps things moving with impressive set pieces, werewolf battles, bizarre magical airships, miraculous feats, and liberal doses of skewed humor. One of his great virtues as a writer is weirdness -- he's not afraid to do the unexpected, and his imagination is formidable... The author excels at depicting the bonds of friendship, the pain of betrayal, and the tragedy of well-laid plans going awry, and that emotional payload is what makes this novel into more than just an entertaining adventure story about a guy with a magical sword who fights monsters. Enge is one of the most engaging of the new sword and sorcery authors, and I hope we get to follow Morlock's exploits for a long time to come."
—Locus, reviewed by Tim Pratt

"Enge writes enjoyable adventures. With The Wolf Age, he has taken a step up. One cares about the characters, and we see as much of the werewolves as we do of Morlock…Recommended."
—Kobold Quarterly

"This has proven to be a surprising series.... Much of the structure of the story is familiar, but Enge provides enough novelty to keep the reader guessing, and reading."
—Don D'Ammassa's Critical Mass
Praise for James Enge's This Crooked Way:

"So could This Crooked Way possibly be equal to what'd come before?
It is. It's the same only different. James Enge is an interesting thoughtful writer.
You see him do these little things all the time in the writing that show either off-the-cuff genius or a lot of rewriting, no way to know which... This Crooked Way is definitely a keeper. I read it in two days. And now it's going to be a
YEAR before the next one comes out. Blah."
—Dragons and Swords blog

"It doesn't seem fair that I should review two books by the same authors in
back-to-back months, but Joel Shepherd and James Enge have left me no choice: Sasha (Pyr, $16, 514 pages) and This Crooked Way (Pyr, $16, 400 pages) are just too good to ignore... Shepherd has started a new tetraology with Sasha called "A Trial of Blood and Steel," and it's set in the typical pre-industrial world, but with limited magic. With three other books to come, and Shepherd's intricate plots depending as much on political and economic issues as on interpersonal relationships, it takes him a while to set the scene. But once through the exposition, Sasha is just my kind of book: complex, action-packed, realistic and unpredictable... I enjoyed Sasha as much as any book I've read recently and was disappointed when I finished it. Volume two can't come soon enough."
—Contra Costa Times and San Jose Mercury News

"James Enge writes with great intelligence and wit. His stories take twisty paths to unexpected places you absolutely want to go. This isn't the same old thing; this is delightful fantasy written for smart readers."
—Greg Keyes, New York Times bestselling author of
The Kingdoms of Thorn and Bone series

"James Enge's work is like Conan as written by Raymond Chandler: rich, witty,
aware of its genre's traditions but not bound by them, with a new surprise of
plot or turn of phrase every moment."
—Paul Cornell, Hugo-nominated writer of Doctor Who and Marvel comics

James Enge is the author of Blood of Ambrose. His fiction has appeared in Black Gate, Flashing Swords, and everydayfiction.com. He is an instructor of classical languages at a Midwestern university.