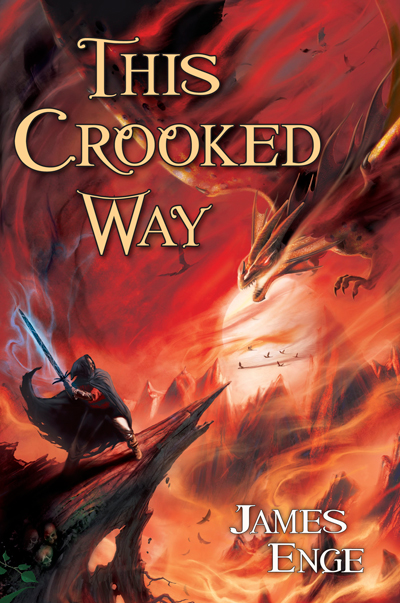 Travelling alone in the depths of winter, Morlock Ambrosius (bitterly dry drunk, master of all magical makers, wandering swordsman, and son of Merlin Ambrosius and Nimue Viviana) is attacked by an unknown enemy.

To unmask his enemy and end the attacks he must travel a long crooked way through the world: past the soul-eating Boneless One, past a subtle and treacherous master of golems, past the dragon-taming Khroi, past the predatory cities of Sarkunden and Aflraun, past the demons and dark gnomes of the northern woods.

Soon he will find that his enemy wears a familiar face, and that the duel he has stumbled into will threaten more lives than his own, leaving nations shattered in its chaotic wake.

And at the end of his long road waits the death of a legend.

"I discovered James Enge through his story in the Swords & Dark Magic anthology, and I am so glad that I did. His work has rekindled my love for sword & sorcery through its combination of vigorous action, depth of character, and crisp prose...His books have a classical heft to them, but are neither stiff nor dated. He refreshes the genre by taking old roads and then suddenly going off into the misty woods beyond, making new paths that wind in and out of our expectations. Really top-notch stuff!"
—The Erudite Ogre blog

"So could This Crooked Way possibly be equal to what'd come before? It is.
It's the same only different. James Enge is an interesting thoughtful writer.
You see him do these little things all the time in the writing that show either off-the-cuff genius or a lot of rewriting, no way to know which... This Crooked Way is definitely a keeper.I read it in two days. And now it's going to be a YEAR
before the next one comes out. Blah."
—Dragons and Swords blog

"It doesn't seem fair that I should review two books by the same authors in
back-to-back months, but Joel Shepherd and James Enge have left me no choice: Sasha (Pyr, $16, 514 pages) and This Crooked Way (Pyr, $16, 400 pages) are just too good to ignore... Shepherd has started a new tetraology with Sasha called "A Trial of Blood and Steel," and it's set in the typical pre-industrial world, but with limited magic. With three other books to come, and Shepherd's intricate plots depending as much on political and economic issues as on interpersonal relationships, it takes him a while to set the scene. But once through the exposition, Sasha is just my kind of book: complex, action-packed, realistic and unpredictable...I enjoyed Sasha as much as any book I've read recently and was disappointed when I finished it. Volume two can't come soon enough."
—Contra Costa Times and San Jose Mercury News

"James Enge writes with great intelligence and wit. His stories take twisty paths to unexpected places you absolutely want to go. This isn't the same old thing; this is delightful fantasy written for smart readers."
—Greg Keyes, New York Times bestselling author of
The Kingdoms of Thorn and Bone series

"James Enge's work is like Conan as written by Raymond Chandler: rich, witty,
aware of its genre's traditions but not bound by them, with a new surprise of
plot or turn of phrase every moment."
—Paul Cornell, Hugo-nominated writer of Doctor Who and Marvel comics

James Enge is the author of Blood of Ambrose. His fiction has appeared in Black Gate, Flashing Swords, and everydayfiction.com. He is an instructor of classical languages at a Midwestern university.