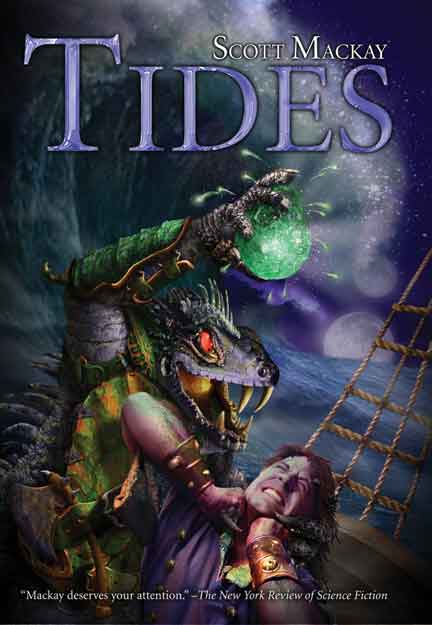 Tides tells the tale of the rise of two intelligent species on the same planet, at a time in their history when they first encounter each other. Paras and Ortok are the only two continents on this planet, the homes to these two different species, and are separated by thousands of miles of ocean. Paras is lush and hospitable, a place where no one ever knows want. It has produced a culture of kindness and honesty. Ortok is bleak and volcanic, where the inhabitants survive at a subsistence level. It has given rise to a culture of cruelty and deceit. But will the citizens of Paras forever remain honest? And will the sentient species on Ortok finally cast out deceit? Hab, a Parassian mariner, follows a cloud of volcanic ash twenty thousand leagues across the world-spanning ocean, battling iced-over seas, the decimation of his crew, and, worst of all, the killer tides - tides that because of two close moons are monstrous in size and are virtually unnavigable in any but the most ingeniously designed ships. Watch cultures collide in this brilliant new novel by the award-winning author of Omnifix and Orbis.

"A rousing narrative of discovery and survival in a world where you don't want to be around when the tide comes in. Mackay left me hanging onto my lifeboat."
—Jack McDevitt, award-winning author of Polaris and Seeker

"Scott Mackay's Tides is a suspenseful odyssey across the seas and continents of a strange new world, fast-paced and satisfying."
—Robert Charles Wilson, Hugo-nominated author of Blind Lake

"Mackay delivers on the surprises when he needs to, and he writes with considerable grace and clarity."
—Locus

Scott Mackay is the award-winning author of eight novels and over forty short stories. He has been interviewed in print, Web, TV, and radio media. His short story "Last Inning" won the 1998 Arthur Ellis Award for best short mystery fiction. Another story, "Reasons Unknown," won the Okanagan Award for best literary short fiction. His first Barry Gilbert Mystery, Cold Comfort, was nominated for the Arthur Ellis Award for best mystery novel, and his SF novel, The Meek, was a finalist for the prestigious John W. Campbell Memorial Award for best SF novel of 2001. His novels have been published in five languages. More on Scott Mackay can be found at www.scottmackay.net
Photograph: Jessica Mackay ©2004