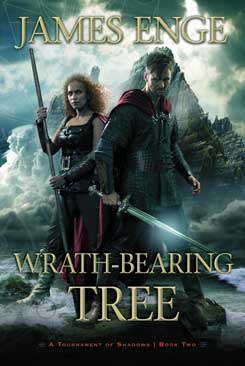 A Tournament of Shadows Book Two

Into the Unguarded Lands . . .

The masked powers of Fate and Chaos are killing gods in the land of Kaen, facing
the Wardlands across the Narrow Sea.

Vocates Aloe Oaij and Morlock Ambrosius go into the Unguarded Lands, on a mission to find the reasons for the godslaying, and to avert any threat to the lands the Graith of
Guardians has sworn to protect.

After crash-landing on the hostile coast of Kaen, they will face vengeful frightened gods,
a calmly murderous dragon, a demon called Andhrakhar, and a bitter old necromancer
named Merlin Ambrosius.

Amid these dangers they will find that they can trust no one but themselves—and each other.

"A brilliant, inventive, arresting piece of work from a master craftsman. This novel captivated me from the very opening pages, and I suspect the same will be true for you. I dare you to prove me wrong."
-Bradley P. Beaulieu, author of The Winds of Khalakovo and The Straits of Galahesh

"Enge's swift-moving story offers both depth and classic sword-and-sorcery questing to create a solid addition to the series."
-Publishers Weekly

Praise for A Guile of Dragons (A Tournament of Shadows Book One):

"Enge is not only a writer of fantasy, he's a devoted fan educated in its history and evolution. That's no more apparent than in his adventures of Morlock Ambrosius, a swordsman wandering a world rife with various magical disciplines. In A Guile of Dragons, Enge takes us back to show us the origins of his hero, as the Longest War-the war between dwarves and dragons presumed to have been over and done with-reignites with the return of the dragons."
-Kirkus Reviews feature "11 'Not-to-miss Science Fiction
and Fantasy Books for August"

"Providing a back door into the Arthur/Merlin mythos, Enge creates a fascinating counterpoint to the familiar legends."
-Library Journal

James Enge is the author of Blood of Ambrose (nominated for a
World Fantasy Award), This Crooked Way, The Wolf Age, and A Guile of Dragons (A Tournament of Shadows Book One). His fiction has appeared in Black Gate, Flashing Swords, and Every Day Fiction. He is an instructor of classical languages at a midwestern university.