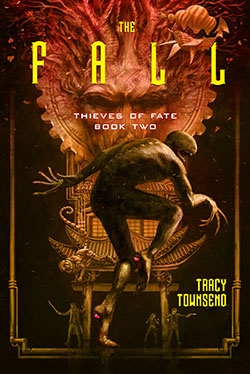 An apothecary clerk and her ex-mercenary allies travel across the world to discover a computing engine that leads to secrets she wasn’t meant to know—secrets that could destroy humanity.

Eight months ago, Rowena Downshire was a half-starved black market courier darting through the shadows of Corma’s underside. Today, she’s a (mostly) respectable clerk in the Alchemist’s infamous apothecary shop, the Stone Scales, and certainly the last girl one would think qualified to carry the weight of the world on her shoulders a second time. Looks can be deceiving.

When Anselm Meteron and the Alchemist receive an invitation to an old acquaintance’s ball—the Greatduke who financed their final, disastrous mercenary mission fourteen years earlier—they’re expecting blackmail, graft, or veiled threats related to the plot to steal the secrets of the Creator’s Grand Experiment. They aren’t expecting a job offer they can’t refuse or a trip halfway across the world to rendezvous with the scholar whose research threw their lives into tumult: the Reverend Doctor Phillip Chalmers.

Escorting Chalmers to the Grand Library of Nippon with her mismatched mercenary family is just a grand adventure to Rowena until she discovers a powerful algebraic engine called the Aggregator. The Aggregator leads Rowena to questions about the Grand Experiment she was never meant to ask and answers she cannot be allowed to possess. With her reunited friends, Rowena must find a way to use the truths hidden in the Grand Library to disarm those who would hunt down the nine subjects of the Creator’s Grand Experiment, threatening to close the book on this world.

"A richly imagined and complex world, full of political machination and philosophical magic, as intricate and beautifully wrought as a pocket watch. A remarkable book."
—Cat Rambo, World Fantasy-award winner and author of the Beasts of Tabat and Hearts of Tabat novels.

"Townsend weaves an intricate tapestry of human motivations, nonhuman races, world-shattering conspiracies and simple awe. The scope of her worldbuilding leaves me breathless."
—Lawrence M. Schoen, author of The Moons of Barsk

Tracy Townsend is the author of The Nine, the first book of The Thieves of Fate series, and a short story, “Late Arrivals,” published by Luna Station Quarterly in March 2016. She holds a master’s degree in writing and rhetoric from DePaul University and a bachelor’s degree in creative writing from DePauw University, a source of regular consternation when proofreading her credentials. She is chair of the English Department at the Illinois Mathematics and Science Academy, an elite public boarding school, where she teaches creative writing and science fiction and fantasy literature. She has been a martial arts instructor, a stage combat and accent coach, and a short-order cook for houses full of tired gamers. Now she lives in Bolingbrook, Illinois with two bumptious hounds, two remarkable children, and one very patient husband.