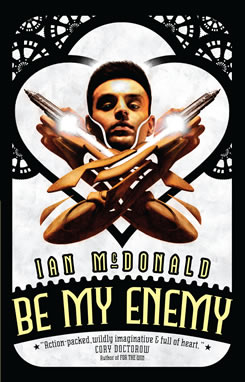 Everett Singh has escaped with the Infundibulum from the clutches of Charlotte Villiers and the Order, but at a terrible price. His father is missing, banished to one of the billions of parallel universes of the Panoply of All World, and Everett and the crew of the airship Everness have taken a wild, random Heisenberg Jump to a random parallel plane. Everett is smart and resourceful, and, from a frozen earth far beyond the Plenitude, he plans to rescue his family. But the villainous Charlotte Villiers is one step ahead of him.

The action traverses the frozen wastes of iceball earth; to Earth 4 (like ours, except that the alien Thryn Sentiency occupied the moon in 1964); to the dead London of the forbidden plane of Earth 1, where the emnants of humanity battle a terrifying nanotechnology run wild—and Everett faces terrible choices of morality and power. But Everett has the love and support of Sen, Captain Anastasia Sixsmyth, and the rest of the crew of Everness—as he learns that the deadliest enemy isn't the Order or the world-devouring nanotech Nahn—it's yourself.

Praise for the series: "I am totally into this book. It's cool, it's fun, and it's exciting. Hanging out with this book makes me feel a little cooler and a little smarter. Plus, I feel like I'm dating the kind of book I always want to date."
—Forever Young Adult

"Chock-full of awesome. Ian McDonald's steampunk London blazes on a vast scale with eye-popping towers, gritty streets, and larger-than-life characters who aren't afraid to fight for each other. The kind of airship-dueling, guns-blazing fantasy that makes me wish I could pop through to the next reality over, join the Airish, and take to the skies."
—Paolo Bacigalupi
Author of Ship Breaker

"Science fiction rules in this stellar series opener about a boy who travels to parallel universes. What joy to find science fiction based on real scientific concepts. . . . In his debut for teens, establishedscience-fiction writer McDonald builds a world just different enough to charm readers into believing. . . . Suspense rules. . . . Shining imagination, pulsing suspense, and sparkling writing make this one stand out."
—Kirkus Reviews, starred review

"McDonald writes with scientific and literary sophistication, as well as a wicked sense of humor. Add nonstop action, eccentric characters, and expert universe building, and this first volume of the Everness series is a winner."
—Publishers Weekly, starred review

"Smashing adventure fiction that spans the multiverse without ever losing its cool or its sense of style. McDonald is one of the greats of science fiction, and his young adult debut is everything you could hope for: romantic, action-packed, wildly imaginative, and full of heart."
—Cory Doctorow, author of For the Win

"Planesrunner is not only excellent YA SF . . . but is simply good SF in a way
which almost reinvents, and possibly makes addictive, the old
parallel-universe trope. It's fun."
—Locus

Ian McDonald is the author of Planesrunner, the first book of the Everness series. He has written thirteen science fiction novels—including the 2011 John W. Campbell Memorial Award winner for Best Novel, The Dervish House—and has lost count of the number of stories. He's been nominated for every major science fiction award, and even won some. McDonald also works in television and in program development—all those reality shows have to come from somewhere—and has written for screen as well as print. He lives in Northern Ireland, just outside Belfast, and loves to travel.