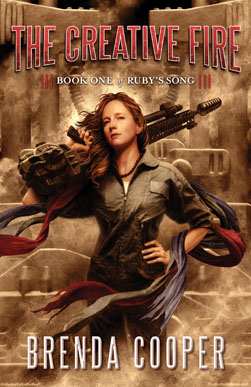 Book One of Ruby's Song

Nothing can match the power of a single voice. . . .

Ruby Martin expects to spend her days repairing robots while avoiding the dangerous peacekeeping forces that roam the corridors of the generation ship the Creative Fire. The social structure of the ship is rigidly divided, with Ruby and her friends on the bottom. Then a ship-wide accident gives Ruby a chance to fight for the freedom she craves. Her enemies are numerous, well armed, and knowledgeable. Her weapons are a fabulous voice, a quick mind, and a deep stubbornness. Complicating it all—an unreliable AI and an enigmatic man she met—and kissed—exactly once—who may hold the key to her success. If Ruby can't transform from a rebellious teen to the leader of a revolution, she and all her friends will lose all say in their future.

Like the historical Evita Peron, Ruby rises from the dregs of society to hold incredible popularity and power. Her story is about love and lust and need and a thirst for knowledge and influence so deep that it burns.

"YAs are sure to relate to the travails and exploits of these
extraordinary young people."
—Booklist, starred review, The Silver Ship and the Sea

Brenda Cooper is the author of the The Silver Ship series. Though not intended as a Young Adult novel, book 1, The Silver Ship and the Sea, was selected by Library Journal as one of the year's 100 Best Books for YA and by Booklist as one of the top ten 2007 adult books for youth to read. The other books in the series are Reading the Wind and Wings of Creation. She is the author of Mayan December and has collaborated with Larry Niven (Building Harlequin's Moon).


Visit her online at
www.brenda-cooper.com, at www.facebook.com/BrendaJCooper, and on Twitter @brendacooper.