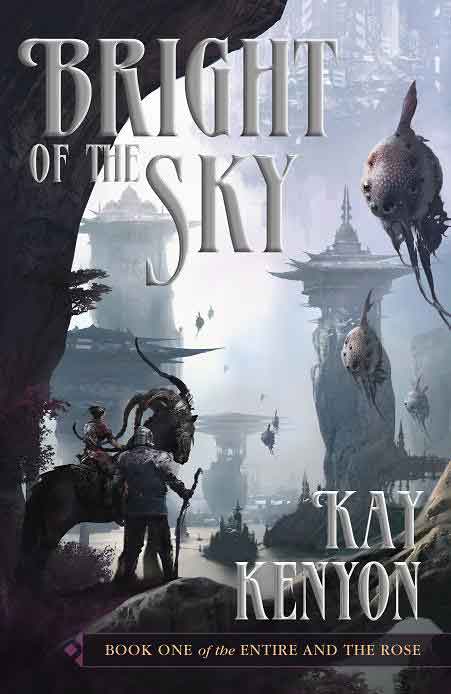 Kay Kenyon, noted for her science fiction world-building, has in this new series created her most vivid and compelling society, the Universe Entire. In a land-locked galaxy that tunnels through our own, the Entire is a bizarre and seductive mix of long-lived quasi-human and alien beings gathered under a sky of fire, called the bright. A land of wonders, the Entire is sustained by monumental storm walls and an exotic, never-ending river. Over all, the elegant and cruel Tarig rule supreme.

Into this rich milieu is thrust Titus Quinn, former star pilot, bereft of his beloved wife and daughter who are assumed dead by everyone on earth except Quinn. Believing them trapped in a parallel universe—one where he himself may have been imprisoned—he returns to the Entire without resources, language, or his memories of that former life. He is assisted by Anzi, a woman of the Chalin people, a Chinese culture copied from our own universe and transformed by the kingdom of the bright. Learning of his daughter’s dreadful slavery, Quinn swears to free her. To do so, he must cross the unimaginable distances of the Entire in disguise, for the Tarig are lying in wait for him. As Quinn’s memories return, he discovers why. Quinn’s goal is to penetrate the exotic culture of the Entire—to the heart of Tarig power, the fabulous city of the Ascendancy, to steal the key to his family’s redemption.

But will his daughter and wife welcome rescue? Ten years of brutality have forced compromises on everyone. What Quinn will learn to his dismay is what his own choices were, long ago, in the Universe Entire. He will also discover why a fearful multiverse destiny is converging on him and what he must sacrifice to oppose the coming storm.

Selected by Publishers Weekly as One of the Best Books of 2007!

"At the start of this riveting launch of a new far-future SF series from Kenyon (Tropic of Creation), a disastrous mishap during interstellar space travel catapults pilot Titus Quinn with his wife, Johanna Arlis, and nine-year-old daughter, Sydney, into a parallel universe called the Entire. Titus makes it back to this dimension, his hair turned white, his memory gone, his family presumed dead and his reputation ruined with the corporation that employed him. The corporation (in search of radical space travel methods) sends Titus (in search of Johanna and Sydney) back through the space-time warp. There, he gradually, painfully regains knowledge of its rulers, the cruel, alien Tarig; its subordinate, Chinese-inspired humanoid population, the Chalin; and his daughter's enslavement. Titus's transformative odyssey to reclaim Sydney reveals a Tarig plan whose ramifications will be felt far beyond his immediate family. Kenyon's deft prose, high-stakes suspense and skilled, thorough world building will have readers anxious for the next installment."
—Publishers Weekly starred review

"[Bright of the Sky] knocked my socks off with its brilliant evocation of a quest through a parallel universe that has a strange river running through it. Unique in conception, like Larry Niven's Ringworld, this is the beginning to what should be an amazing SF-Fantasy series."
— Locus Online, Best of 2007

"[A] star-maker, a magnificent book that should establish its author's reputation as among the very best in the field today. Deservedly so, because it's that good...a classic piece of world-making....here is another of those grand worlds whose mere idea invites us in to share in the wonder. Bright of the Sky enchants on the scale of your first encounter with the world inside of Rama, or the immense history behind the deserts of Dune, or the unbridled audacity of Riverworld. It's an enormous stage demanding a grand story and, so far, Kenyon is telling it with style and substance. The characters are as solid as the world they live in, and Kenyon's prose sweeps you up and never lets go. On its own, [it] could very well be the book of the year. If the rest of the series measures up, it will be one for the ages."
—SFSite.com

"The author of The Seeds of Time imagines a dystopic version of our own world. Reminiscent of the groundbreaking novels of Philip K. Dick, Philip Jose Farmer,
and Dan Simmons, her latest volume belongs in most libraries. [Read the first chapter at www.kaykenyon.com-Ed.]"
—Library Journal

"In a fascinating and gratifying feat of worldbuilding, Kenyon unfolds the wonders and the dangers of the Entire and an almost-Chinese culture that should remain engaging throughout what promises to be a grand epic, indeed."
—Booklist

"With a rich and vivid setting, peopled with believable and sympathetic
characters and fascinating aliens, Kay Kenyon has launched an impressive
saga with Bright of the Sky."
—SFFWorld.com

"Bright Of The Sky effortlessly blends science fiction concepts and world-building with fantasy story telling to create a unique and intriguing whole....Kay Kenyon has created a standout novel....I'm looking forward to the rest of series. 4 out of 5 stars." —SFSignal.com

"Kay Kenyon's Bright of the Sky is her richest and most ambitious novel yet — fascinating, and best of all, there promises to be more to come."
—Greg Bear, Hugo and Nebula Award-winning author of
Quantico and Darwin's Radio

"Kay Kenyon has created a dark, colorful, richly-imagined world that works as both science fiction and fantasy, a classic space opera that recalls the novels of Dan Simmons. Titus Quinn bestrides Bright of the Sky in the great tradition of larger-than-life heroes, an engaging, romantic, unforgettable character.
The stakes are high in this book, the characters memorable, the world
complex and fascinating. A terrific story!"
—Louise Marley, author of Singer in the Snow

"Kenyon's vision of a unique universe ranks with those of such science fiction
greats as Frank Herbert and Orson Scott Card."
—Publishers Weekly

"Kenyon writes beautifully, her characters are multilayered and complex, and her extrasolar worlds are real and nuanced while at the same time truly alien."
—Robert J. Sawyer

"Kay Kenyon is a writer with enough talent to become a
household name in the sf community."
—Infinity Plus

Kay Kenyon, nominated for the Philip K. Dick and the John W. Campbell awards, began her writing career (in Duluth, Minnesota) as a copywriter for radio and TV. She kept up her interest in writing through careers in marketing and urban planning, and published her first novel, The Seeds of Time, in 1997. She is the author of numerous short stories, including those in I, Alien; Live Without a Net; and Stars: Stories Based on the Songs of Janis Ian. She lives in Wenatchee, Washington, with her husband. You can read a first chapter of her books at www.kaykenyon.com.