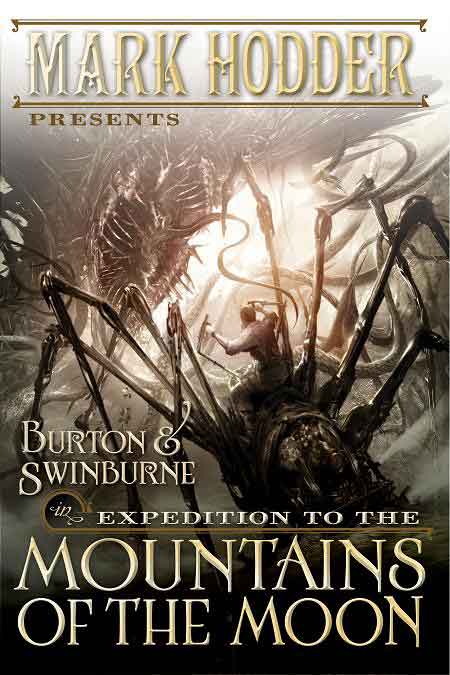 Burton & Swinburne in Expedition to the Mountains of the Moon

It is 1863, but not the one it should be. Time has veered wildly off course, and now the first moves are being made that will lead to a devastating world war and the fall of the British Empire.

The prime minister, Lord Palmerston, believes that by using the three Eyes of Naga—black diamonds possessing unique properties—he’ll be able to manipulate events and avoid the war. He already has two of the stones, but the third is hidden somewhere in the Mountains of the Moon, the fabled source of the Nile.

Palmerston sends Sir Richard Francis Burton to recover it. For the king’s agent, it’s a chance to redeem himself after his previous failed attempt to find the source of the great river. That occasion had led to betrayal by his partner, John Hanning Speke. Now Speke is leading a rival expedition on behalf of the Germans, and it seems that the battle between the former friends may ignite the very war that Palmerston is trying to avoid!

Caught in a tangled web of cause, effect, and inevitability, little does Burton realize that the stakes are far higher than even he suspects.

A final confrontation comes in the mist-shrouded Mountains of the Moon, in war- torn Africa of 1914, and in Green Park, London, where, in the year 1840, Burton must face the man responsible for altering time: Spring Heeled Jack!

Burton and Swinburne’s third adventure is filled with eccentric steam-driven technology, grotesque characters, and bizarre events, completing the three-volume story arc begun in The Strange Affair of Spring Heeled Jack and The Curious Case of the Clockwork Man.

Praise for the Burton & Swinburne's Series:

"The usual superlatives for really clever fantasy (imaginative, mind-bending, phantasmagorical) aren't nearly big enough for this debut novel. With this one book, Hodder has put himself on the genre map. . . . [The Strange Affair of Spring Heeled Jack] is incredibly ambitious, and the author pulls it off like an old pro: not only is the setting exciting and fresh, the story is thrilling and full of surprises."
—Booklist, starred review

"Whatever one chooses to call it, it would be very difficult to deny its overwhelming brilliance. I can't remember the last time a novel has surprised, awed, and enthused me so utterly that I'm almost left at a loss for words for how to recommend it."
—Rob Will Review

"If you're looking for a cold night's entertainment, this high-spirited mix of fact and fancy will do quite nicely, quite nicely indeed."
—Washington Post

". . . a most delightful steampunk universe that is so well-wrought readers will be ill-disposed to the world as we know it."
—The Agony Column

"Like its predecessor, Clockwork Man is a wild, funny ride of a read that I hated to see end. . . . A more individualistic, even anarchistic, series I have yet to see.
And so the wait for the third in the trilogy begins."
—Night Owl Reviews

Mark Hodder is the author of volume 1 of the Burton & Swinburne trilogy, The Strange Affair of Spring Heeled Jack. He is the creator and caretaker of the BLAKIANA Web site (http://www.sextonblake.co.uk), which he designed to celebrate, record, and revive Sexton Blake, the most written-about fictional detective in English publishing history. A former BBC writer, editor, journalist, and Web producer, Mark has worked in all the new and traditional medias and was based in London for most of his working life until 2008, when he relocated to Valencia in Spain to de-stress and write novels. He can most often be found at the base of a palm tree, hammering at a laptop. Mark has a degree in cultural studies and loves British history (1850 to 1950, in particular), good food, cutting-edge gadgets, cult TV (ITC forever!), Tom Waits, and a vast assortment of oddities.