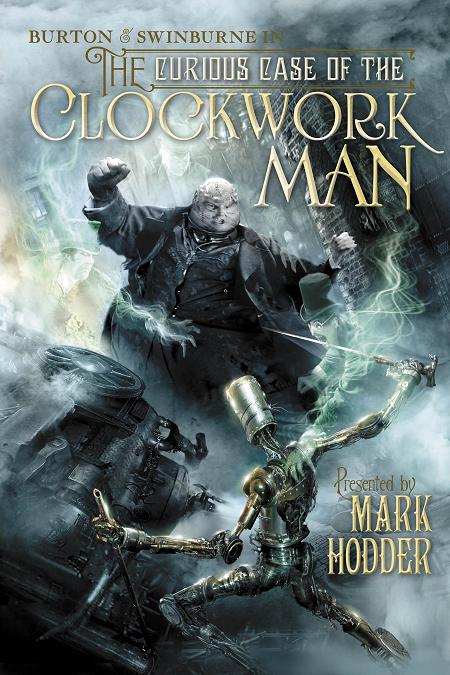 Burton & Swinburne in The Curious Case of the Clockwork Man

Time has been altered, and Sir Richard Francis Burton, the king’s agent, is one of the few people who know that the world is now careening along a very different course from that which Destiny intended.

When a clockwork-powered man of brass is found abandoned in Trafalgar Square, Burton and his assistant, the wayward poet Algernon Swinburne, find themselves on the trail of the stolen Garnier Collection—black diamonds rumored to be fragments of the Lemurian Eye of Naga, a meteorite that fell to Earth in prehistoric times.

His investigation leads to involvement with the media sensation of the age: the Tichborne Claimant, a man who insists that he’s the long lost heir to the cursed Tichborne estate. Monstrous, bloated, and monosyllabic, he’s not the aristocratic Sir Roger Tichborne known to everyone, yet the working classes come out in force to support him. They are soon rioting through the streets of London, as mysterious steam wraiths incite all-out class warfare.

From a haunted mansion to the Bedlam madhouse, from South America to Australia, from séances to a secret labyrinth, Burton struggles with shadowy opponents and his own inner demons, meeting along the way the philosopher Herbert Spencer, Isambard Kingdom Brunel, Florence Nightingale, and Charles Doyle (father of Sir Arthur Conan Doyle).

Can the king’s agent expose a plot that threatens to rip the British Empire apart, leading to an international conflict the like of which the world has never seen? And what part does the clockwork man have to play?

"The usual superlatives for really clever fantasy (imaginative, mind-bending, phantasmagorical) aren't nearly big enough for this debut novel. With this one book, Hodder has put himself on the genre map. ...Hodder has brilliantly combined various genre staples - time travel, alternate reality, steampunk - into something you've never quite seen before. His mid-nineteenth-century Britain features steam-driven velocipedes, rotorchairs, verbally abusive messenger parrots, a pneumatic rail system, and robotic street cleaners. ...The book is incredibly ambitious, and the author pulls it off like an old pro: not only is the setting exciting and fresh, the story is thrilling and full of surprises. Hodder's only problem now is to find a way to follow up this exhilarating debut, which will appeal not only to sf/fantasy readers but also to mystery and historical-fiction fans."
—Booklist starred review

"This is an exhilarating romp through a witty combination of nineteenth-century English fact and fiction. Mark Hodder definitely knows his stuff and has given us steam opera at its finest.... A great, increasingly complex, plot, some fine characters, and invention that never flags! It gets better and better, offering
clues to some of Victorian London's strangest mysteries. This is the best
debut novel I have read in ages."
—Michael Moorcock

"Hodder's debut is genius. I don't think there are very many other ways to put it.
His plotting is intricate and intriguing, his voice is superb, the character
are engaging and original, and all of it is so unexpectedly fun. There is no
better adjective to describe such all-around greatness. Genius.
Don't come into this book expecting any less."
—Lec Book Reviews

Mark Hodder is the author of volume 1 of the Burton & Swinburne trilogy, The Strange Affair of Spring Heeled Jack. He is the creator and caretaker of the BLAKIANA Web site (http://www.sextonblake.co.uk), which he designed to celebrate, record, and revive Sexton Blake, the most written-about fictional detective in English publishing history. A former BBC writer, editor, journalist, and Web producer, Mark has worked in all the new and traditional medias and was based in London for most of his working life until 2008, when he relocated to Valencia in Spain to de-stress and write novels. He can most often be found at the base of a palm tree, hammering at a laptop. Mark has a degree in cultural studies and loves British history (1850 to 1950, in particular), good food, cutting-edge gadgets, cult TV (ITC forever!), Tom Waits, and a vast assortment of oddities.