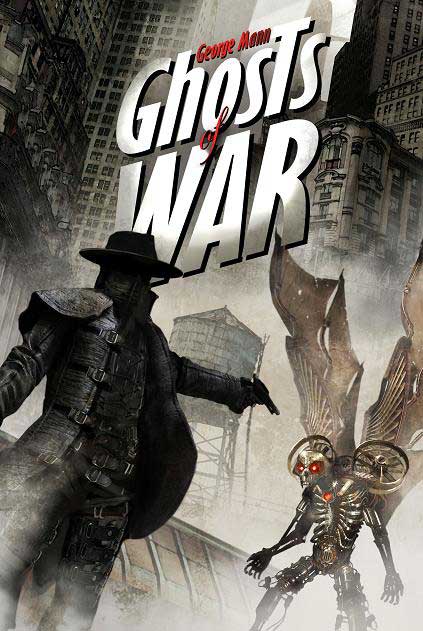 NEW YORK CITY IS BEING PLAGUED BY A PACK OF FEROCIOUS BRASS RAPTORS...

...strange, skeletonlike creations with batlike wings that swoop out of the sky, attacking people and carrying them away into the night. The Ghost has been tracking these bizarre machines, and is close to finding their origin: a deranged military scientist who is slowly rebuilding himself as a machine.

However, this scientist is not working alone, and his scheme involves more than a handful of abductions. He is part of a plot to escalate the cold war with Britain into a full-blown conflict, and he is building a weapon—a weapon that will fracture dimensional space and allow the monstrous creatures that live on the other side to spill through. He and his coconspirators—a cabal of senators and businessmen who seek to benefit from the war—intend to harness these creatures and use them as a means to crush the British.

But the Ghost knows only too well how dangerous these creatures can be, and the threat they represent not just to Britain, but the world. The Ghost’s efforts to put an end to the conspiracy bring him into an uneasy alliance with a male British spy, who is loose in Manhattan protecting the interests of his country. He also has the unlikely assistance of Ginny, a drunken ex-lover and sharpshooter, who walks back into his life, having disappeared six years earlier in mysterious circumstances.

While suffering from increasingly lucid flashbacks to WWI, the Ghost is subjected to rooftop chases, a battle with a mechanized madman, and the constant threat of airborne predators, while the fate of the world hangs in the balance. Can he derail the conspiracy and prevent the war with the British from escalating beyond control?

"A beautifully crafted novel whose dark heart is counterbalanced with small moments of unexpected tenderness. And dirigibles."
—RobWillReview.com

"I have a problem with vigilante stories most of the time, but this was clearly a comic book world and it turned out to be quite a lot of fun."
—Don D'Ammassa's Critical Mass

"Atmospheric and pleasingly enigmatic, the novel pulls us
into world of pure pulp."
—io9.com

"I lost sleep wanting to read this book... it was just huge amounts of fun."
—SF Signal

"It's a combination of genres that for me really checks all the boxes; golden age/pulp era superhero, police procedural, steampunk with more then a few nods to Lovecraft and finer literature. If F. Scott Fitzgerald were to have been a fan of weird tales this is the world he might have envisioned in an alternate universe version of The Great Gatsby... Me, I cant wait for the next installment there are not so subtle clues that there is more to come."
—Deadwood blog

"Ghosts of Manhattan is a brilliant hybrid of superhero/vigilante tale, film noir, and 1920s decadence... It is an exceedingly dark character study of damaged characters attempting to make the world a better place than it has been for them. It is a portrait of a world just one step removed from our reality, a New York that never was but could have been. It is a thematic rumination on the nature of heroism, blessed with exquisite prose, twisty mystery (one revelation in particular almost made me want to start reading all over again, to note the earlier clues), genuinely thrilling suspense, and cracking violence—a beautifully crafted novel whose dark heart is counterbalanced with small moments of unexpected tenderness. And dirigibles."
—RobWillReview.com

George Mann is the author of Ghosts of Manhattan, The Affinity Bridge, The Osiris Ritual, and The Human Abstract, as well as numerous short stories, novellas, and an original Doctor Who audiobook. He has edited a number of anthologies including The Solaris Book of New Science Fiction and The Solaris Book of New Fantasy and a retrospective collection of classic Sexton Blake stories, Sexton Blake, Detective. He lives near Grantham, UK, with his wife, son, and daughter. You can follow him on Twitter at twitter.com/George_Mann.