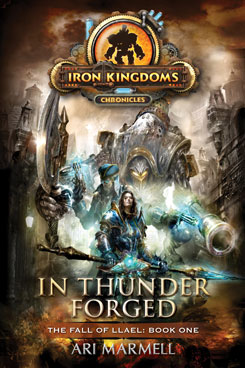 The first novels based upon the award-winning WARMACHINE® steam-powered fantasy wargame and the world of the Iron Kingdoms™ Role Playing Game! Action-packed steam-tech fantasy novels that combine elements of epic wartime adventure with thrilling cloak-and-dagger espionage

The Iron Kingdoms are at war—a war fought with machine guns and magic, knights of valor, and earth-shaking titans of steam and steel. And now that war may hinge entirely on nothing more than a sheaf of papers.

An alchemical formula, stolen by an ally they thought they could trust, could cost the brave soldiers of Cygnar everything. Their only hope: a cunning spy, a knight out of her element, and a frighteningly small unit of the best that Cygnar has to offer.

Arrayed against them is not only a single, devious enemy, but the combined intelligence apparatus—and possibly the full military might—of the most brutal martial power Cygnar has ever known.

"If you're a fan of dark, gritty military fantasy, [this] is the book for you. Ari Marmell is a superb writer, and he's at the top of his game in this first volume of The Iron Kingdoms Chronicles…. Fresh and different. And highly addictive."
- Adventures Fantastic

"Marmell's characters are memorable and compelling, and his creativity and originality within the steampunk fantasy genre makes him a remarkable storyteller. This one is a keeper."
- Library Journal

The author of The Goblin Corps and the Widdershins Adventures
series, Ari Marmell has also worked as an author of role-playing-
game materials for games such as Dungeons & Dragons and the
World of Darkness line. Born in New York, Ari lives in Texas with his
wife, George; two cats; and a variety of neuroses.

Visit his Widdershins page at www.facebook/Madeleine.Valois.