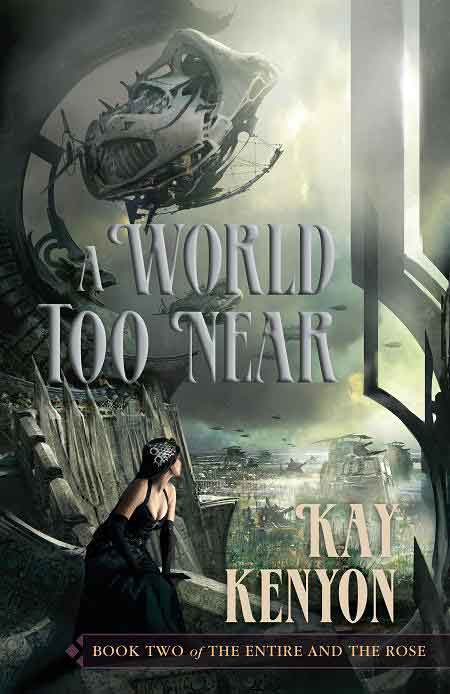 A World Too Near

Book Two of the Entire and the Rose

In Bright of the Sky, Kay Kenyon introduced a milieu unique in science fiction and fantasy: The Entire, a five-armed radial universe that exists in a dimension without stars and planets and is parallel to our own universe. Stretched over The Entire is a lid of plasma, called the bright, which ebbs and flows, bringing day and twilight. Under the vast canopy of the bright live many galactic species, copied from our own universe.

Former star pilot Titus Quinn loves The Entire, but now he must risk annihilating it by destroying the fortress of Ahnenhoon. To sustain a faltering Entire, Ahnenhoon's great engine will soon reach through the brane separating the universes and consume our own universe in a concentrated ball of fire.

Quinn sets off on a journey across The Entire armed with the nan, a small ankle bracelet containing nanoscale military technology that can reduce Ahnenhoon and its deadly engine to chaos. He must pursue his mission even though his wife is held prisoner in Ahnenhoon and his own daughter has sent the assassin MoTi to hunt him down.

As he traverses the galactic distances of The Entire, he learns more of the secrets of its geography, its fragile storm walls, its eons-long history, and the factions that contend for dominance. One of these factions is led by his daughter, who though young and a slave, has at her command a transforming and revolutionary power.

As Quinn wrestles with looming disaster and approaches the fabled concentric rings of Ahnenhoon's defenses, he learns that in the Entire, nothing is what it appears. Its denizens are all harboring secrets, and the greatest of these is the nature of the Entire itself.

"The fate of two universes hangs in the balance in this intricately plotted sequel to Bright of the Sky (2007). To sustain the constructed universe called the Entire, the alien Tarig have built the engine of Ahnenhoon, designed to turn the Rose—Earth's universe—into a power source. Earth's survival depends on pilot Titus Quinn's plan to destroy the engine, but ambitious scientist Helice Maki claims Titus may instead use the mission to seek his missing daughter, Sydney, lost somewhere in the Entire. Successfully scheming her way into accompanying Titus, Helice plots to steal his nanotech weaponry and grab power from the Tarig. Titus's only hope may be his wife, Johanna, captured 10 years ago by the Tarig, who has slowly taught herself enough about the engine to have a chance of disabling it. Tangled motivations, complex characters and intriguing world-building will keep readers on the edges of their seats."
— Publishers Weekly (starred review)

"…continues the promise shown in book one….The Entire is a marvelous parallel universe…[and] the details of [the main character's] quest make for stunning adventure fiction, while the mysteries revealed about The Entire are completely mind-blowing….it is epic fantasy and world-building on a grand scale. It would be criminal if this novel didn't make year's best lists at the end of 2008."
—Realms of Fantasy

"Kenyon balanced the characters in this novel as well as she did Bright of the Sky….I found myself unable to stop reading. As the novel draws to a close, the pressure builds for Titus and for Joanna, making for a briskly paced conclusion that you want to read through fast, but conversely, you don't want to end. A tease at the end gives readers just enough to crave the next volume."
—SFFWorld.com

"...[a novel] in which Kenyon's imagination is matched by her storytelling, where the excitement and tension of not knowing if Titus will succeed in saving The Rose or when the double cross will happen. Kenyon expands our knowledge of the world(s) and tells a fairly fast paced story at the same time. She uses old and new characters in different ways, and rewards those readers who took the time to get this far. A World Too Near is well worth the time."
- Adventures in Reading

"… equally appealing to science fiction and fantasy fans….Complex characters with shifting, sometimes twisted, motivations and loyalties, combined with a tightly paced plot full of political intrigue and tense action, make for a much stronger second outing in the Entire and the Rose. The conclusion…leaves you hungry for the next volume. A definite 'A' title."
—King of the Nerds

"This is only book two of a projected four books, but already Kenyon's world-building (universe building) combined with adventure have produced an epic on a scale not seen since Niven's Ringworld and Farmer's Riverworld sagas. The story is complex but the crises classically simple, so new readers can plunge right in. And, after finishing World, newcomers will almost certainly turn to Bright to see what they missed."
—AuthorMagazine.org

Critical Acclaim for Book One of The Entire and the Rose: