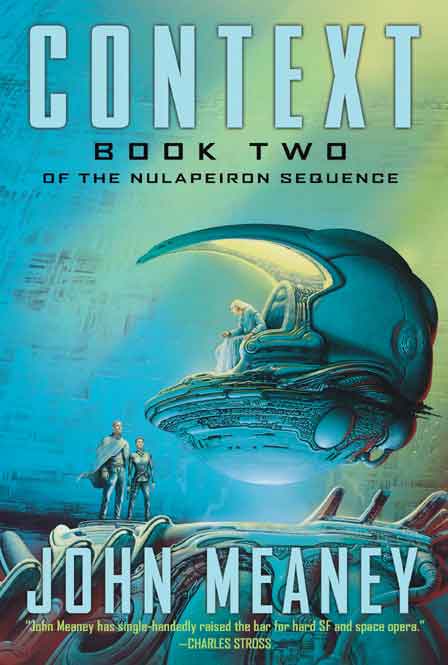 Nulapeiron: a world isolated for twelve centuries. Its billions of inhabitants occupy subterranean strata, ruled by a trained aristocracy of lords and ladies whose power base is upheld by oracles. But revolution has touched all of its many cultures – failing in its intent, yet changing everything.

Now Lord Tom Corcorigan – the commoner-turned-noble who renounced his power; the poet, logosopher, and holder of the key to understanding the myriad wonders of mu-space; the legendary one-armed warrior, former revolutionary, and would-be peacemaker – lies fatally wounded. His survival is dependent on his meeting with a mysterious seer whose spacetime-warping talents transcend the merely Oracular. It is a confrontation that will result in bitter tragedy and loss. Can the woman he loves be truly dead, or can quantum mysteries lie beyond the grave?

Turning his back on a society sliding once more into anarchy and chaos, a disillusioned and despairing Tom wanders this strange, stratified world in search of meaning, love, and his own salvation. But it seems Nulapeiron is threatened by a vast, insidious, and terrifying enemy whose origins may lie beyond their world, beyond their understanding. And now is the time for legends to be reborn.

Sequel to the acclaimed Paradox and the second book in the Nulapeiron Sequence, Context is a thrilling, daring and complex novel that confirms John Meaney as one of British science fiction’s most original and exciting practitioners.

"Replete with thought-provoking ruminations on the nature of space and time, Meaney's second Nulapeiron book (after Paradox) follows Tom Corcorigan as the logosopher and one-armed warrior, now a lord, seeks an antidote for the femtocyte toxins that are slowly killing him.... [Readers] should enjoy the exquisite world building of this ambitious SF epic."
—Publishers Weekly

"Science fiction fans looking for the next big genre classic need look no further than the Nulapeiron Sequence, a highly cerebral sci-fi trilogy by British author John Meaney that has been (deservedly) compared to Frank Herbert's epic masterwork Dune. Meaney's Nulapeiron Sequence (Paradox, Context and the forthcoming Resolution) is a landmark work for multiple reasons: unparalleled world building, the world of Nulapeiron is one of the most vividly described and utterly unique realms ever imagined in the history of science fiction; plot density, like Nulapeiron's multi-leveled society, the story of Tom Corcorigan has innumerable layers; dozens of secondary themes and subplots; and above all else, readability: fans of hard science fiction will not be able to put this sweeping and thought-provoking saga down."
—B&N Explorations

"What we have here...is two novels [Paradox and Context] of a three novel
sequence that attempts to be both literary and thematically quite sophisticated
and mimetic, unlike space opera, without being anything more or less than science fiction period, and for my money succeeds....[T]his is science fiction for people
who read science fiction."
—Asimov's Science Fiction

John Meaney is the author of four novels— Paradox, Context, and Resolution, the latter three titles comprising his critically-acclaimed Nulapeiron Sequence. He also has numerous short-fiction publication credits. His novelette “Sharp Tang” was short-listed for the British Science Fiction Association Award in 1995. His novella “The Whisper of Disks” was included in the 2003 edition of The Year’s Best Science Fiction: Twentieth Annual Collection, edited by Gardner Dozois. His novella “The Swastika Bomb” was reprinted in The Best Short Science Fiction Novels of the Year (2004), edited by Jonathan Strahan. His story “Diva’s Bones” was reprinted in The Year’s Best Fantasy 5, edited by David G. Hartwell and Kathryn Cramer. Meaney has a degree in physics and computer science, and holds a black belt in Shotokan Karate. He lives in England. Visit his website at www.johnmeaney.com.