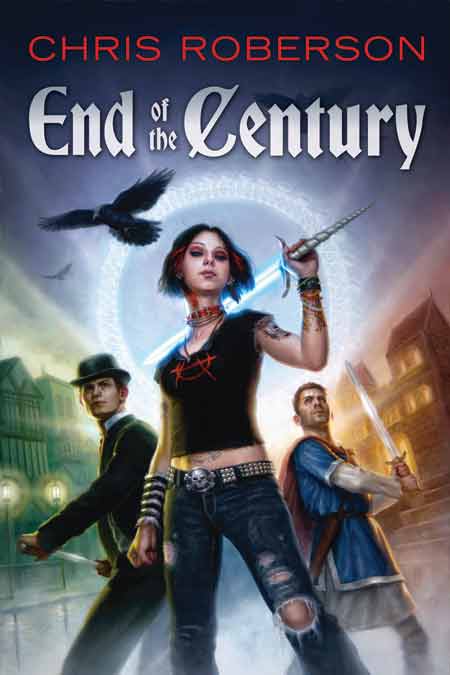 End of the Century

UNCOVER THE SECRETS OF THE HOLY GRAIL

Three people. Three eras. One city. Endless possibilities. End of the Century is a novel of the distant past, the unimaginable future, and the search for the Holy Grail. Set in the city of London, the narrative is interlaced between three ages, in which a disparate group of heroes, criminals, runaways, and lunatics are drawn into the greatest quest of all time.

Twilight - Londinium, Sixth Century, CE
Galaad, a young man driven by strange dreams of a lady in white and a tower of glass, travels to the court of the high king Artor in Londinium, abandoned stronghold of the Roman Empire in Britain. With the dreams of Galaad as their only guide, Artor and his loyal captains journey west to the Summerlands, there to face a threat that could spell the end of the new-forged kingdom of Britain.

Jubilee - London, 1897
Consulting detective Sandford Blank, accompanied by his companion Roxanne Bonaventure, is called upon to solve a string of brutal murders on the eve of Queen Victoria's Diamond Jubilee. The police believe that Jack the Ripper is back on the streets, but Blank believes that this is a new killer, one whose motive is not violence or mayhem, but the discovery of the Holy Grail itself. And what of the corpse-white Huntsman and his unearthly hounds, who stalks the gaslit streets of London?

Millennium - London, 1999
At the eve of the new millennium, American teenager Alice Fell is on the run, and all alone. On the streets of a strange city, friendless and without a pound to her name, Alice is not sure whether she's losing her mind, or whether she is called by inescapable visions to some special destiny. Along with a strange man named Stillman Waters, who claims to be a retired occultist and spy, she finds herself pursued by strange creatures, and driven to steal the priceless “vanishing gem” that may contain the answers to the mysteries that plague her.

The three narratives—Dark Ages fantasy, gaslit mystery, and modern-day jewel heist—alternate until the barriers between the different times begin to break down, and the characters confront the secrets that connect the Grail, the Glass Tower, and the vanishing gem. And lurking behind it all is the entity known only as Omega.

"This ambitious fantasy combines three very British stories: an Arthurian fable, a Victorian murder mystery and a modern-day YA adventure tale....
The hinted interconnections between the three tales are
complex and fascinating.… a rollicking ride."
—Publishers Weekly

"Roberson conjures up a triple-threaded tale…. Roberson bedecks all three strands with a spectacular collection of secrets, murky underworld organizations, and everything from time travel to magical swords. In the dizzying conclusion, time lines converge in a satisfying reimagining of a very old story."
—Booklist

"The author of Here, There & Everywhere and The Voyage of Night Shining White blends high fantasy, Victorian mystery, and urban fantasy into one mesmerizing story that refreshes the Arthurian legend."
—Library Journal

"A World Fantasy Award finalist and winner of the Sideways Award for Best Alternate History Short Form, Roberson ultimately delivers a superior multi-linear novel worthy of the authors to whom he dedicated End of Century."
—San Antonio Current

"What do a soldier from the 6th century, a sleuth from the 19th century and an American teenager in 1999 all have in common? They are all characters in Chris Roberson's ambitious quest for the Holy Grail that intermingles all
three ages to truly entertaining effect."
—Geek Monthly

"Chris Roberson is one of that bold band of young writers who are taking the stuff of genre fiction and turning it into a whole new literary form – a form for the 21st century. A talented storyteller, he has a unique ear, a clever eye, an
eloquence all too rare in modern fiction."
—Michael Moorcock

"Roberson is another author to watch."
—Charles DeLint, The Magazine of Fantasy & Science Fiction

Chris Roberson's novels include Here, There & Everywhere; The Voyage of Night Shining White; Paragaea: A Planetary Romance; X-Men: The Return; Set the Seas on Fire; The Dragon's Nine Sons; Iron Jaw and Hummingbird; and Three Unbroken. His short stories have appeared in such magazines as Asimov's, Interzone, Postscripts, and Subterranean, and in anthologies such as Live Without a Net, FutureShocks, and Forbidden Planets. Along with his business partner and spouse Allison Baker, he is the publisher of MonkeyBrain Books, an independent publishing house specializing in genre fiction and nonfiction genre studies, and he is the editor of the anthology Adventure, Vol. 1. He has been a finalist for the World Fantasy Award three times: once each for writing, publishing, and editing; twice a finalist for the John W. Campbell Award for Best New Writer; and twice for the Sidewise Award for Best Alternate History Short Form (winning in 2004 with his story “O One”). Chris and Allison live in Austin, Texas, with their daughter, Georgia. Visit him online at www.chrisroberson.net.