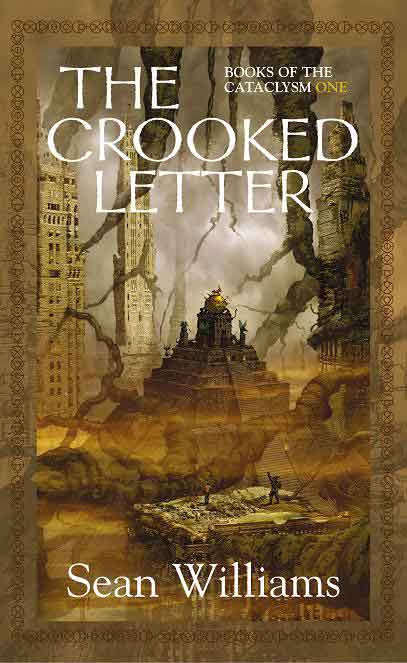 When mirror twins Seth and Hadrian Castillo travel to Europe on holidays, they don’t expect the end of the world to follow them. Seth’s murder, however, puts exactly that into motion.

From opposite sides of death, the Castillo twins grapple with a reality neither of them suspected, although it has been encoded in myths and legends for millennia. The Earth we know is just one of many “realms”, three of which are inhabited by humans during various stages of their lives. And their afterlives...

In the tradition of Philip Pullman and Ursula K. Le Guin and inspired by numerous arcane sources, the Books of the Cataclysm begin in the present world but soon propel the reader to a landscape that is simultaneously familiar and fantastic.

"Drawing on worldwide myths and legends, Australian author Williams (The Resurrected Man) expertly twists the familiar into the grotesque in this deeply spooky story, the first in a new fantasy series."
—Publishers Weekly

"The characters are extremely well developed. The realms we find ourselves
in are completely different but cohesive and believable with the context of the book. This is a convoluted story with lots of depth and flavor. I look forward to the next
two volumes.... Highly recommended."
—SFRevu.com

"[E]xplores the nature of life, death, and reality. Big subjects, but with the precision of an archaeological expert, Williams is more than up to the task. There is a lot to admire in Williams' epic fantasy, the wide range of global religions and myths of which his afterlife is comprised, to the characterization of the protagonists. The story has the mythic resonance of Neil Gaiman's Sandman and American Gods, the dark fantasy/horror one might associate with something like Stephen King's Dark Tower saga, the multiple universes/realities of Moorcock's Eternal Champion mythos, and the strange, weird creatures one might associate with China Miéville's Bas-lag novels. Williams imagined world is equal part those novels which preceded his, but fortunately, there is enough newness to both the approach and vision to make this the work of a singular vision...." [R]eading many of the other titles Lou Anders has published with Pyr, I shouldn't have been surprised with both the quality of the writing and the breadth of Williams' imagination. Like a lot of the other books published by Pyr, Williams captures what makes a tried and true genre like Epic Fantasy so popular and enjoyable of a genre and spins a tale with his unique voice. This is the type of book you finish and can't wait to read the sequel."
—SFFWorld.com

"[A]n intimidating, complex piece of art which, despite its ostensible appeal to the epic fantasy readers that gaggle about the sf section, exists somewhere at the margins of fantasy. It is too good, too filled for its own good. [It's] one of those books that defies average review, begging rather for hyperbole and glib synopsis when it deserves better .... an ambitious novel, tackling subjects rarely encountered in fantasy. It's greatest strength lies in the cosmology that Williams has created, which draws upon a wide range of world mythologies to create a believable spiritual analog that encompasses all religions, without resorting to mindnumbing preaching."
—Gabe Chouinard, http://deadcities-icon.livejournal.com/96628.html

"Williams's mix of grand metaphysical vision, weird landscapes, and wild adventure makes for a great read, but it's the deeply human story at the heart of The Crooked Letter that really makes it something wonderful."
—Hal Duncan, author of Vellum

"A dark and compelling tale."
—Fiona McIntosh, author of Blood and Memory

"Imagine Magritte's hallucinatory painting of a locomotive steaming out of
fireplace ... imagine that smoke-plumed black locomotive roaring into a surrea
hell of monsters, fiends, and demons. René Magritte meets Hieronymus Bosch. That's what it feels like to read - to experience - Sean Williams's brilliant
new novel, The Crooked Letter. Williams is a master storyteller, and this novel is a celebration of his wild talent."
—Jack Dann, Nebula and World Fantasy Award-winning
author of The Rebel: An Imagined Life of James Dean.

"The Crooked Letter shows that Pyr is willing to take chances and publish works that could elevate fantasy to new heights....The worldbuilding is of the first order. Williams shows just how fertile his imagination is, all the while pooling themes from humanity's myths and legends. Much like Hal Duncan's Vellum and Tad Williams' Otherland, readers never know what's coming next. Anything can happen in The Crooked Letter. The novel's hallucinatory imagery is without a doubt its best feature....The Crooked Letter is a superior tale, one that should satisfy even jaded readers. Surreal, imaginative, captivating, unique - there's a lot to love about this one. Add this novel to your 'books to read' list. The final verdict: 8/10."
—Pat's Fantasy Hotlist