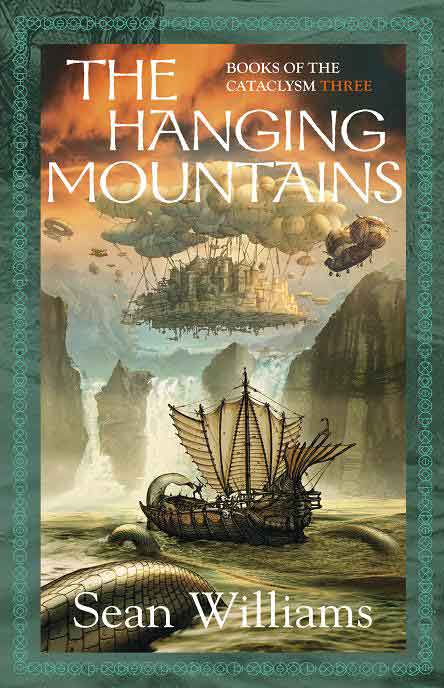 The Divide is flooded, at great cost of human - and inhuman - life. Far from home, Sal, Shilly and Skender seek the source of the deluge in the legendary Hanging Mountains, traveling in a magical ship of bone. New threats await them in the fog forests of the Panic, and new tests of their friendship. Caught in a conflict that erupts between two long-forgotten civilizations, they struggle to discern ally from foe, and to find trust when it is needed most.

In their wake comes the Homunculus, vessel and prison of the Castillo twins - sole, strange survivors of the catastrophe that changed the world forever, a thousand years ago. Their mission is paramount, their urgency contagious. Something much darker and deadlier than the Swarm is stirring in the heart of the mountains.

And for Habryn Kail, already assumed dead by his masters, it might really be the finish of him, this time ...

"What Williams does well is in creating an interesting fantasy setting without the usual fantasy tropes…obviously a lot of thought has gone into the world of the Catacylsm and Williams does a great job bringing it to life. The characters are also an interesting lot…I think anyone who likes fantasy in general ought to give The Hanging Mountains and this whole series a read....One thing I must praise Pyr for is the physical book itself, specifically the dust jacket. The cover art is awesome, but the entire jacket is well done. From the electric blue runes surrounding the cover art to the green toned rest of the cover, the whole thing just looks amazing. In fact, all of the books in this series so far look terrific. Couple that with a very easy to read font and layout on the inside, and these are some very impressive books."
—SFSignal

"As with the previous book, Williams creates a series of places and peoples that feel utterly different to anything that's come before. This truly unique world makes it easy to want to explore…. Every character is very three-dimensional and no easy cliché is used anywhere. Sean Williams is writing an important series here that does a great service to the fantasy genre by encouraging it to break tradition. His powerfully creative world-building should stand as a call to arms for fantasy writers to leave the world of Tolkien-aping lands behind and really start being adventurous. Read all three of The Books Of The Cataclysm and when the fourth is released, buy that, too. I know I will."
—SFCrowsnest

"This book moves fast and it quickly swept me into the complex, beautiful and deadly world that Williams has so artfully crafted. In the second chapter, the boat is attacked by a large white snakelike creature…. my heart was racing through this scene and I knew I had to finish the story. If the author can do that much in less than thirty pages, imagine how good the rest of the book will be!"
—SFRevu

"The Hanging Mountains has something of the decaying uncertainty of the fantasy novels of China Mieville and James Lovegrove. Since it is the third book in a series of four novels — which themselves follow an earlier trilogy — there is a lot of assumed familiarity with the setting and the characters.... However, this does not detract from the intrigue of the world or the pleasure of the story."
—Chris McDonough, Australian Bookseller & Publisher