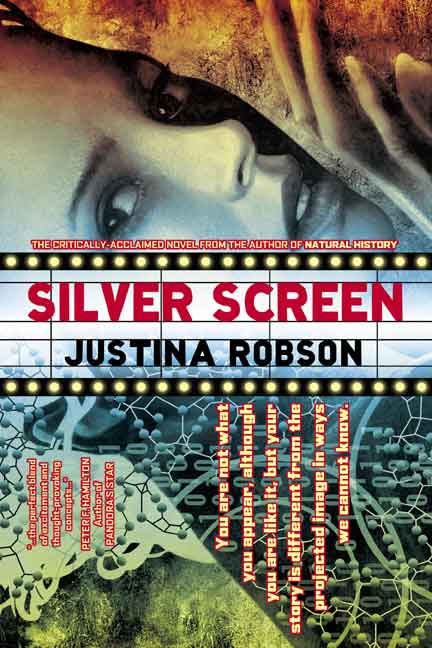 Silver Screen presents an enjoyably different, subversive slant on the science fiction themes of AI and cyberspace. Insecure and overweight heroine Anjuli O’Connell is one of a group of friends who have been hot-housed from an early age to perform in genius-level jobs. But Anjuli worries that her eidetic memory and her friendship with genuine smart boy Roy Croft has been her ticket to success, rather than any real intelligence of her own.

She’s put to the test when Roy kills himself in an experiment to upload his mind into cyberspace, seeking that SF dream of bodiless immortality, which doesn’t work as expected. At the same time her boyfriend’s research has led to him harnessing himself to dubious biomechanoid technologies, which pull the user into mental symbiosis, creating hybrid consciousness – a new “I”, continuous with the old, but different. “Where does life end and the machine begin?”

Meanwhile Anjuli’s grasping multinational employer, OptiNet, the owner of global communications AI, 901, is locked into an increasingly bitter war with the Machine-Greens, who preach AI liberation. As the case for 901’s humanity, or otherwise, comes up before the Strasbourg Court, expert witness Anjuli is targeted by assassins and entangled in the hunt for an algorithm which is the key to machine consciousness, and which may even be the master-code of life itself.

This story explores many interfaces between humans and their technologies, between the promises of science and the explanations of faith. It is written in a first-person style that mingles elements of detective story and confessional. Alongside its SF content, the book delves into the complexities of friendship, loyalty, love, and betrayal from an intimate human perspective.

This is "grrrl-style" SF: as well as all the favorite “Airfix” features, the protagonists deconstruct personal relationships amidst macrocosmic and deeply philosophical goings-on. The writing is punchy, but with a literary sheen. It delivers complex concepts and a twisting plot with a deceptively light touch.

“Robson blends mandatory cyberpunk scenes of elaborate computer hacking with more quotidian concerns, such as Anjuli's desire to do good science. As a female narrator surrounded by other competent women, Anjuli is no hackneyed ninja cyborg assassin but a smart, insecure Everywoman with a stubborn idealistic streak. How refreshing....Robson is unafraid to mix robust action with metaphysical-quantum conceits....She also harks back to the courtroom drama in Robert A. Heinlein's "Jerry Was a Man," which hinged on the emancipation of a genetically engineered ape. In doing so, she successfully penetrates the "barrier of light and shadow play that will always be between us, you and me, human and AI."
—Washington Post

“Again, Pyr is doing a fantastic job of publishing books in the US previously unavailable to American readers.... Via Anjuli, Robson provides a fascinating character through which to view her future world. We see the everyday technologies, which may seem somewhat novel by today’s standards, take root. Like the best thought-provoking science fiction Robson finds intriguing ways to extrapolate how people will adapt to these plausible advancements .... [The ending] left me a bit surprised, which is a good thing indeed .... Robson’s novel raised many significant and relevant questions and stimulated a great deal of thought, both while reading it, and upon reflection. Silver Screen was one of the more interesting novels I’ve read this year and I would recommend it.“
—SFFWorld.com

“[T]hought-provoking SF...a fascinating peek into the development of
one of SF's brightest new stars.”
—Publishers Weekly

“... astonishingly full of imaginative imagery and stylish writing....Provocative and unique, Robson is stellar talent of the first magnitude.”
—CFQ/Cinefantastique

"A cerebral and absorbing novel that explores the nature of consciousness and artificial intelligence, from the author of Natural History (2003) .... Robson's prose is lean and dynamic, and the speculative concepts are cutting edge and ultra cool. A startlingly innovative take on the tried-and-true theme of artificial intelligence."
—Starred review, Kirkus Reviews

“This exciting novel raises interesting questions about the
interactions between humans and machines.”
—Dallas Morning News

"Robson manages brilliantly the difficult task of showing a near
future that grows convincingly from our own."
—Dreamwatch

"With Silver Screen, Justina Robson has found the perfect blend of excitement and thought-provoking concepts, which lifts this novel far above the ordinary.
Ideas and future trends are pitched with determined realism, doing what
Science Fiction is supposed to do, and leave you thinking with
considerable anxiety about the way we're neading."
—Peter F. Hamilton, author of Pandora's Star

"Robson's plot zigzags in unexpected directions, especially with
revelations about the Source; there's tragedy and trauma, but happy
surprises too. An impressive SF debut."
—David Langford