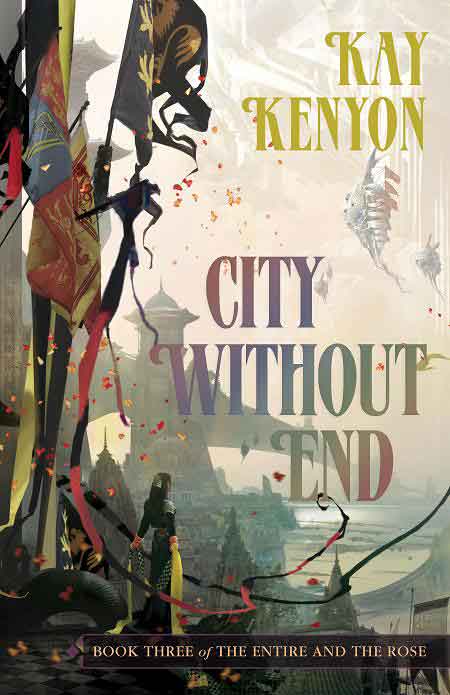 Book Three of the Entire and the Rose

In this series Kay Kenyon has created her most vivid and compelling society yet, the universe Entire. Reviewers have called this “a grand world,” “an enormous stage,” and “a bravura concept.”

On this stage unfolds a mighty struggle for dominance between two universes. Titus Quinn has forged an unstable peace with the Tarig lords. The ruinous capability of the nanotech surge weapon he possesses ensures détente. But it is a sham. In what the godwoman Zhiya calls “a fit of moral goodness,” he’s thrown the weapon into the space-folding waters of the Nigh. This clears the way for an enemy he could have never foreseen: the people of the Rose. A small cadre led by Helice Maki is determined to take the Entire for itself and leave the earth in ruins. The transform of earth will begin deep in a western desert and will sweep over the lives of ordinary people, entangling Quinn’s sister-in-law Caitlin in a deepening and ultimate conspiracy.

In the Entire, Quinn stalks Helice to the fabled Rim City, encircling the heart of the Entire. Here he at last finds his daughter, now called Sen Ni, in the Chalin style. Outside of earth-based time, she has grown to adulthood. He hardly knows her, and finds her the mistress of a remarkable dream-time insurgency against the Tarig lords—and more, a woman risen high in the Entire’s meritocracy. Quinn needs his daughter’s help against the woman who would destroy the earth. But Sen Ni has her own plans and allies, among them a boy-navitar unlike any other pilot of the River Nigh—a navitar willing and supremely able to break his vows and bend the world.

Quinn casts his fate with the beautiful and resourceful Ji Anzi who—sent on a journey to other realms—holds the key to Quinn’s heart and his overarching mission. But as he approaches the innermost sanctuary of the Tarig, he is alone. Waiting for him are powerful adversaries, including a lady who both hates and loves him, the high prefect of the dragon court, and Quinn’s most implacable enemy, a warrior whose chaotic mind will soon be roused from an eternal slumber.

Reviewers Praised the first two books of The Entire and The Rose:

Bright of the Sky:

A World Too Near:

"Tangled motivations, complex characters and intriguing world-building will keep readers on the edges of their seats."
—Publishers Weekly (starred review)