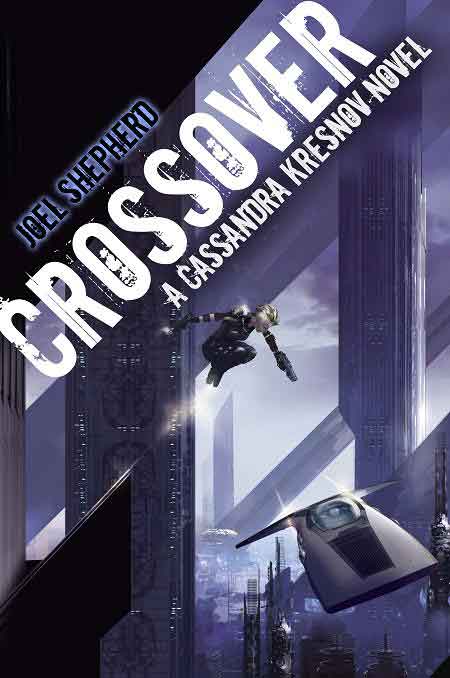 Crossover is the first novel in a series which follows the adventures of Cassandra Kresnov, an artificial person, or android, created by the League, one side of an interstellar war against the more powerful, conservative Federation. Cassandra is an experimental design — more intelligent, more creative, and far more dangerous than any that have preceded her. But with her intellect come questions, and a moral awakening. She deserts the League and heads incognito into the space of her former enemy, the Federation, in search of a new life.

Her chosen world is Callay, and its enormous, decadent capital metropolis of Tanusha, where the concerns of the war are literally and figuratively so many light years away. But the war between the League and the Federation was ideological as much as political, with much of that ideological dispute regarding the very existence of artificial sentience and the rules that govern its creation. Cassandra discovers that even in Tanusha, the powerful entities of this bloody conflict have wound their tentacles. Many in the League and the Federation have cause to want her dead, and Cassandra’s history, inevitably, catches up with her.

Cassandra finds herself at the mercy of a society whose values preclude her own right even to exist. But her presence in Tanusha reveals other fault lines, and when Federal agents attempt to assassinate the Callayan president, she finds herself thrust into the service of her former enemies, using her lethal skills to attempt to protect her former enemies from forces beyond their ability to control. As she struggles for her place and survival in a new world, Cassandra must forge new friendships with old enemies, while attempting to confront the most disturbing and deadly realities of her own existence.

"Crossover was the 1999 breakout novel for Australian Joel Shepherd, and the first Cassandra Kresnov story. 'Sandy' is a very humaniform artificial person, with analogues for everything a 'straight' or natural human has, except that she's made out of starship alloy and battle-suit muscle and was designed for the express purpose of killing humans in a war between the expansionist/post humanist League and the conservative Federation of old Earth. Sandy's makers made her a bit too bright, and she's figured out that the only way to win at war is not to play the game...but try as she might to fit into civilian society, the game is coming to her. If Hell has no fury greater than a woman scorned, that's just because it hasn't met Cassandra Kresnov yet. Highly Recommended...certainly worth the wait."
—SFRevu

"What makes Crossover stand out is how plausibly and realistically Shepherd draws his characters. The dialogue between Kresnov and her new colleagues propel the narrative and plot very well. Their thought processes and reactions occur very logically and are on equal standing with the plot/action elements of the story. Crossover is a satisfying, engaging, and thought-provoking read from another great new voice from Pyr. The good thing is that Crossover is the first of three books." —SFFWorld

"[A] very intriguing first novel. The politics of the world feel real, complicated and full of power struggle. Shepherd has obviously gone out of his way to not make this a typical android/human story and Cassandra acts like a real person would, instead of pages of existential talk. This definitely helps the character feel fresh despite the number of times a similar effort has been tried....The climax of Crossover is fantastic and the fact that Cassandra enjoys being stronger and more powerful rather than wanting to be simply human is of great credit to the book. She sees herself as an improved human and that seemed far more real to me than an artificial human wishing they were truly 'alive'. For a first novel, this is a very good one and with more books to follow Shepherd is definitely one to watch.
Give this one a whirl and you'll enjoy it."
—SFCrowsnest.com

"The plot is a good blend of action, politics and musings on being an artificial human trying to make its way in a human world.…No expense is spared with blowing the scenery up, but the fights never once become cartoonish.…I loved Crossover and haven't had as much fun with a sci-fi book in a long time. I'm hoping for more of the same from Breakaway and it won't be too long before I find out. Nine out of Ten."
—Graeme's Fantasy Book Review

"Two more US titles made my top ten this year, Crossover by Joel Shepherd and Paragaea by Chris Roberson. Shepherd's book is a high action, gritty techno thriller that reads like a cross between Ghost in the Shell and Richard Morgan's Altered Carbon, introducing the artificial human Cassandra Kresnov in her fight for the right to survive."
—Waterstone's Bookclub (UK)

"Cassandra [Kresnov] is an experimental design—more intelligent, more creative, and far more dangerous than any that have preceded her. Ready to read all about her? As for myself, I cannot wait to see this made into a movie!"
—Bookviews.com

"Very exciting and impossible to put down. I can't wait for the other two to appear."
—Philadelphia Weekly Press

"This fast-paced read uses political intrigue, dirty dealings, old and new friendships to keep the story well grounded in human issues while raising some interesting points to ponder. Shepherd's new series is certain to gain an instant following with this exciting and thoughtful entry."
—MonstersandCritics.com

"[A] rich world.... it's good to know that somewhere androids are still dreaming of electric sheep, and authors wonder what it means to be human."
—Contra-Costa Times (San Francisco)

"Shepherd...works to make Cassandra someone the reader is interested in....[T]his first volume makes the proposed trilogy look to be a promising ride."
—Starlog

Joel Shepherd was born in Adelaide, South Australia, in 1974. He has studied Film and Television, International Relations, has interned on Capitol Hill in Washington, and traveled widely in Asia. His first trilogy, the Cassandra Kresnov Series, consists of Crossover, Breakaway and Killswitch. Visit Joel Shepherd's Web site at www.joelshepherd.com.