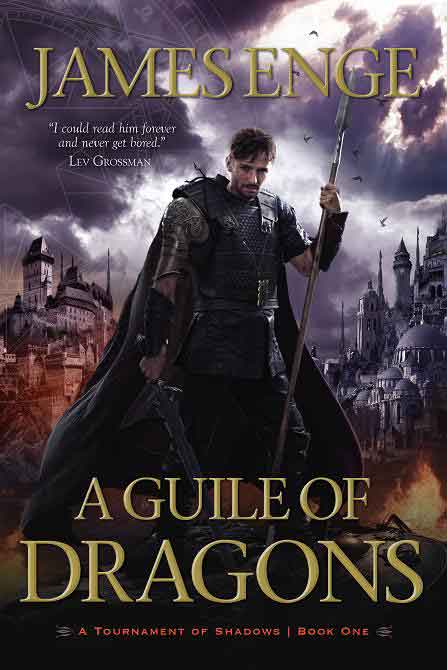 It's dwarves vs dragons in this origin story for Enge's signature character, Morlock Ambrosius!

Before history began, the dwarves of Thrymhaiam fought against the dragons as the Longest War raged in the deep roads beneath the Northhold. Now the dragons have returned, allied with the dead kings of Cor and backed by the masked gods of Fate and Chaos.

The dwarves are cut cut off from the Graith of Guardians in the south. Their defenders are taken prisoner or corrupted by dragonspells. The weight of guarding the Northhold now rests on the crooked shoulders of a traitor’s son, Morlock syr Theorn (also called Ambrosius).

But his wounded mind has learned a dark secret in the hidden ways under the mountains. Regin and Fafnir were brothers, and the Longest War can never be over...

"James Enge's books are like a strange alloy of Raymond Chandler, Fritz Lieber, Larry Niven and some precious metal that is all Enge's own. They're thrilling, funny, and mysteriously moving. I see 10 things on every page I wish I'd written. I could read him forever and never get bored."
—Lev Grossman
New York Times bestselling author of The Magicians

"…what Tolkien might have written had he lived in this postmodern age."
—Grasping for the Wind

"[E]fficiently excellent epic fantasy… Enge's engaging portrait of Morlock…
will have readers hunting down earlier books to learn more about the
adventurer and his history."
—Publisher Weekly, starred review

"Providing a back door into the Arthur/Merlin mythos, Enge creates a fascinating counterpoint to the familiar legends."
—Library Journal

"A Guile of Dragons is both beautiful and breathtaking. James Enge has the soul of a warrior-poet and the unflinching heart of a Cimmerian. Get ready for some long nights turning pages."
—Jon Sprunk , author of Shadow's Master

"Enge twists science through arcane skills that allow matter and life to be manipulated in a logical fashion. Very cool stuff, in my opinion…Enge has created a story that I wanted to finish. I wanted to know how things would turn out, and I enjoyed Enge's juxtaposition of loyalty with Morlock's harsh world. The Wolf Age is a very solid book."
—Fantasy Literature

"Inventive and delightful... [I] promptly tracked down the earlier [Morlock Ambrosius] titles, Blood of Ambrose and This Crooked Way, because I enjoyed this one so much… Enge's plot is admirably twisty, and he keeps things moving with impressive set pieces, werewolf battles, bizarre magical airships, miraculous feats, and liberal doses of skewed humor. One of his great virtues as a writer is weirdness -- he's not afraid to do the unexpected, and his imagination is formidable... The author excels at depicting the bonds of friendship, the pain of betrayal, and the tragedy of well-laid plans going awry, and that emotional payload is what makes this novel into more than just an entertaining adventure story about a guy with a magical sword who fights monsters. Enge is one of the most engaging of the new sword and sorcery authors, and I hope we get to follow Morlock's exploits for a long time to come."
—Locus, reviewed by Tim Pratt

"Enge writes enjoyable adventures. With The Wolf Age, he has taken a step up. One cares about the characters, and we see as much of the werewolves as we do of Morlock…Recommended."
—Kobold Quarterly

"This has proven to be a surprising series.... Much of the structure of the
story is familiar, but Enge provides enough novelty to keep the reader
guessing, and reading."
—Don D'Ammassa's Critical Mass

James Enge is the author of Blood of Ambrose (nominated for a World Fantasy Award), This Crooked Way, and The Wolf Age. His fiction has appeared in Black Gate, Flashing Swords, and everydayfiction.com. He is an instructor of classical languages at a Midwestern university.