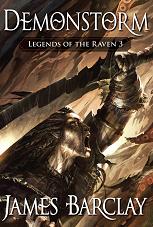 Legends of the Raven 3

THIS IS THE END.... The dragons have gone home, the elves are safe. The Raven have kept their promises. But fate has not finished with them. As the war between the colleges rages on, an old enemy senses that his chance to revenge a bitter defeat has come.

Tessaya, Lord of the Paleon Tribes, has waited patiently for his moment and now, with Balaia in flames, he makes his move and unleashes the Wesmen hordes. In Xetesk, his forces scattered, Dystran, Lord of the Mount, faces certain defeat by the Wesmen unless he unleashes the horrfying power of dimensional magics. And Dystran has not come this far to be beaten at the last by a rabble of ignorant tribesmen.

And so the veil between dimensions is torn.... And beyond, a predatory evil stirs. Demons catch the scent of countless souls in Balaia. Can even The Raven prevail when the world is coming to an end?

"With The Raven, Barclay has created one of the more memorable casts of heroes in recent memory, supporting them within a world of magic based upon constructs entirely his own. While action may dominate the pages of his narratives, this has not taken place in the absence of increasingly strong characterization or a secondary world imaginatively and freshly developed. If his stories may lack the more serious and grander intentions of authors such as Matthew Stover or Steven Erikson, they nonetheless represent the best among his less ambitious contemporaries in providing simpler and more straightforward heroic entertainment. And, with the inclusion in Elfsorrow of an underlying, if relatively simple, environmental statement, the author may well be showing an emerging interest in using his narratives for purposes other than mere entertainment. As his writing talents have continued to evolve and improve, this is certainly a writer to watch, for immediate enjoyment as well as for future development."
—SF Site