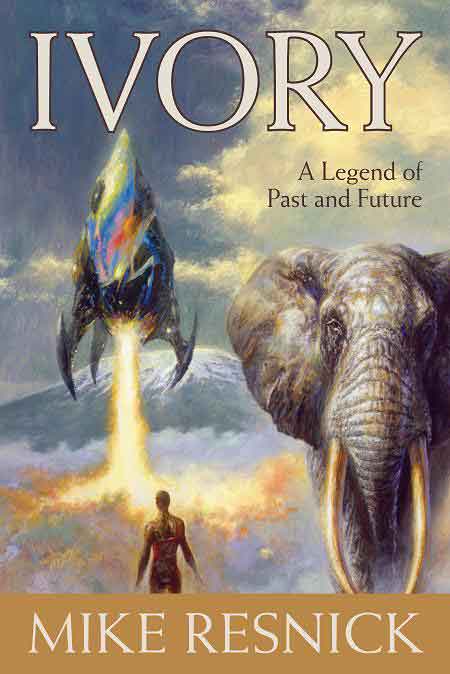 In the year 6303, when earth is bare of anything larger than an insect or a mouse and most people have left for the stars, Duncan Rojas receives a most unusual visitor. His name is Bukoba Mandaka, and he is the last of the Maasai.

Mandaka wants Rojas, senior researcher for Braxton's Records of Big Game, to find the tusks of the Kilimanjaro Elephant, tusks that weigh over 200 lb. each. Why? Mandaka will not say, but he will pay enormous sums for them. And Rojas cannot resist the challenge of tracing something lost for 3000 years.

Back and forth through time, in card games, wars, and rivalries, Rojas searches. But as he begins to glimpse the elusive, lost power of ancient Africa, he is seduced, and before long the quest has become his own.

With Ivory, Mike Resnick has created a powerful novel spanning worlds and centuries, an exploration of the nature of history and legend, and a riveting parable for our times.

"[A] display of expert storytelling….What makes this book fun is the way the story is told, drawing the reader into the mystery of the tusks. Resnick is a storytelling machine and Ivory is his well-crafted product….What the reader sees in Ivory is a bunch of millennia-spanning, world-hopping glimpses in the travels of the tusks, but what he gets is a thoroughly engaging read….These are the kinds of well-told stories that make reading such a pleasure. MY RATING: FIVE STARS."
—SF Signal

"I know that I have said it before, so pardon if this sounds repetitious, but Mike Resnick is incredible when he is writing stories set in (or about) Africa....This book is riveting. Five out of five stars....I was struck by how well Resnick built almost a divinity around the ivory, and the effect that the ivory had on the Maasai's future. The ultimate message in Kirinyaga is that holding too hard onto outdated and irrelevant mores from the past will lead to unhappiness. The moral here is that if you violate your heritage, you risk your future. Resnick really does have a knack for morality tales, so don't let the conflicting messages throw you from either work. Personally, I cannot see this book failing to impress anyone. It's a must get, and I've now got a new permanent addition to my bookcase. Rating: five stars."
—OmphalosBookReviews.com

"Mike Resnick is one of the few American writers who really knows how to write about Africa…. Ivory, which was first published in 1988, demonstrates this, along with Resnick's flair for solid speculation. Ivory … reminds us again that many science-fiction writers have as good an understanding of history as they do of the future, and Resnick's Africa – both past and future – is authentic and alive as ever. It's also got the best cover it has ever had and a great, solid feel – which many classic reissues deserve but don't receive – thanks to Pyr."
—Bookgasm.com

"[P]rovides a perfect example of this visionary author's fertile imagination. Resnick, whose work regularly hinges upon the power of legend, has cultivated in these pages an epic history that spans millennia and the breadth of the galaxy."
—TBNWeekly.com (Tampa Bay)