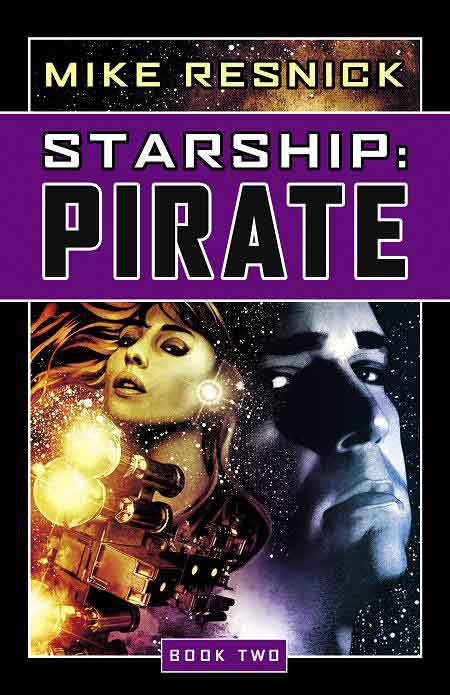 Book Two of the Starship Series

The date is 1967 of the Galactic Era, almost three thousand years from now. The Republic, created by the human race but not yet dominated by it, is in the midst of an all-out war with the Teroni Federation. After his latest exploit saved millions of lives but embarrassed his superiors, Captain Wilson Cole, a man with a reputation for exceeding orders but getting results, found himself the victim of the media feeding frenzy, a political scapegoat despite years of dedicated military service. Faced with a court martial, he was rescued by the loyal crew of his ship, the Theodore Roosevelt. Now branded mutineers, the crew of the Teddy R. has quit the Republic, never to return.

Seeking to find a new life for themselves, Wilson Cole and comrades remake the Teddy R. as a pirate ship and set sail for the lawless Inner Frontier. Here, powerful warlords, cut-throat pirates, and struggling colonies compete for survival in a game where you rarely get a second chance to learn the rules.

But military discipline is poor preparation for a life of pillaging and plundering, and Cole's principles naturally limit his targets. Seeking an education on the nature of piracy, Cole hunts more knowledgeable players. Enter the beautiful but deadly Valkyrie, Val for short, and the enigmatic alien fence known as David Copperfield. But hanging over everything is the fearsome alien pirate — the Hammerhead Shark.

With Starship: Pirate, five-time Hugo winner Mike Resnick continues the story begun in his very first military SF. Will the galaxy ever be the same?

This second book in the Starship series includes diagrams of the Teddy R., plus rules for two Starship board games.

"What makes this novel so enjoyable is the dialogue; the majority of the story is told through the words of the characters. Snappy banter...proves entertaining. There are some omniscient narrative scenes, but most of the action and plot is relayed through the characters themselves. This allows the entire story to move along at a brisk pace, even more so with the brevity of the novel. As with Starship: Mutiny, Resnick puts a lot of story, ample amounts of action balanced with tension in a short novel. With no words wasted, the story is very entertaining. While a very character-driven story, Resnick also brings in enough action to balance out the story....With the two of five projected Starship novels published, Resnick is building a nice, thoroughly entertaining space opera."
—SFFWorld.com

"One of the characters in this sequel to Starship: Mutiny (2005) asks, 'Whatever happened to heroes who didn't think everything through, but just walked in with weapons blazing?' The answer is 'They're buried in graveyards all across the galaxy.' This sums up nicely Hugo-winner Resnick's approach to military SF, which isn't so much about fighting and hardware as it is about strategy and leadership....Readers craving intelligent, character-driven SF need look no further."
—Publishers Weekly

"This sequel to Starship: Mutiny, set in Resnick's Birthright Universe ... shows the author's genuine flair for spinning a good yarn. Snappy dialog, intriguing human and alien characters, and a keen sense of dramatic focus make this a strong addition to most sf collections, with particular appeal to the sf action-adventure readership."
—Library Journal

"Resnick is writing good old-fashioned space adventure here, bereft of any complex themes or hard-science underpinnings, but he does it as well as it's ever been done.
The 'DVD extras' in this book include, in addition to the chronology of the Birthright Universe in which Resnick sets most of his SF, the deceptively simple rules of two games mentioned in his stories, Bilsang and Toprench, which have been featured in various Resnick stories, revealed here for the first time anywhere.
Fans of science-fiction space adventures will be looking forward to
Starship: Mercenary, the third book in this five-book series. Grade: B."
—Sci Fi Weekly

"[O]nce more [Resnick] has written a tale that gives so much to anyone familiar
with his work, whilst (I would imagine) allowing someone new to his work instant access to this Universe. This series is Mike Resnick's first military sf. However, if you (like me) do not overly like military science fiction, do not be discouraged. This is very much
Mike Resnick fiction.... If you like your sf to be space opera, if you like your sf
gadgets to just work without needing an explanation of how, and if you don't
need to worry about the vast interstellar distances getting in the way of telling
the tale - then Resnick is an author you should read."
—The Eternal Night

"[T]he adventure that follows is enjoyable, action-packed and funny.
Resnick's style is effortless and full of humorous asides. The plot is enjoyable
but it's the camaraderie and banter between the characters that really makes this a page-turner. The characters are larger than life but not in a clichéd way - the enigmatic alien fence David Copperfield is an exceptionally good character. This book is a light read and won't break any boundaries, but like most Resnick, it is absolutely unabashedly enjoyable. Sheer space opera entertainment is on the menu and
it's a sweet dish. Pick the 'Starship' series up and while away some enjoyable
relaxation time in the 'Birthright Universe.' You won't regret it."
—SFCrowsnest.co.uk

"Through these now many years the collected works of Mike Resnick have given me more pleasure per capita than those of any other writer; I read Soul-Eater in
manuscript in l980 and pronounced that if he carried on Resnick would in a decade be viewed as the most important science fiction writer to emerge in the decade to come.
An easy call as the rocketships then accumulated. Starship: Pirate is a wonderful
novel, an expanse of color, light and wit; its splendid rogues in space as fetching as
they are wickedly memorable. It is a privilege to have lived and worked in
science fiction during Mike Resnick's quarter century."
— Barry N. Malzberg

"Mike Resnick is one of the finest writers the science-fiction field has ever produced, and Starship: Pirate is one of his very best works. A wonderful book."
—Robert J. Sawyer, Hugo Award-winning author of Hominids

"A memorable ride with a handful of Resnick's trademark oddball characters, a shipload of faster-than-light buccaneers, and a pirate queen to die for, all lightly seasoned by Charles Dickens. A rollicking good time."
—Jack McDevitt

Praise for the Starship Series