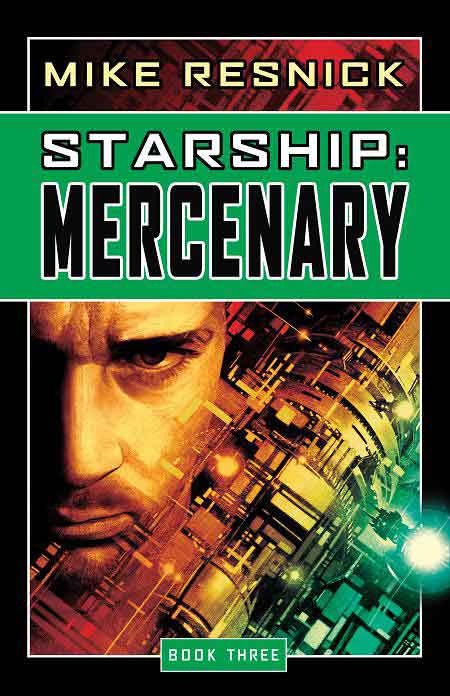 Book Three of the Starship Series

The date is 1968 of the Galactic Era, almost three thousand years from now. The Republic, created by the human race but not yet dominated by it, is in the midst of an all-out war with the Teroni Federation. Captain Wilson Cole, a man with a reputation for exceeding orders but getting results, found himself the victim of a media feeding frenzy, a political scapegoat despite years of dedicated military service. Faced with a court martial, he was rescued by the loyal crew of his ship, the Theodore Roosevelt. Branded mutineers, the Teddy R. has quit the Republic, never to return.

Seeking to find a new life, Wilson Cole first remade the Teddy R. as a pirate ship plying the spaceways of the lawless Inner Frontier. But military discipline and honor were a poor match for a life of pillaging and plundering, and Cole's principles naturally limited his targets. Taking on a new role, the Teddy R. becomes a mercenary ship, hiring out to the highest bidder. Whether it's evacuating a hospital before war can reach it, freeing a client from an alien prison, or stopping a criminal cartel from extorting money from a terrified planet, the crew of the Teddy R. proves equal to the task. Along the way they form a partnership with the once human Platinum Duke, team up with a former enemy, and make the unique Singapore Station their headquarters.

But the life of a mercenary is not always predictable, and eventually circumstance pits Cole and the Teddy R. against his right-hand woman, the former Pirate Queen known as the Valkyrie. Soon the fragile trust that has grown between these two legends is put to the test as they find themselves on opposite sides of a job.

"As ever, Resnick is effortlessly readable. The plot feels under control at all times and yet many of the events feels spontaneous and random. The characters are funny, eclectic and engaging and the action thrills. This is a writer at the top of his game, writing extremely enjoyable space opera."
—SFCrowsnest.com

"While the novel is fast paced and entertaining, Copperfield's character adds a great deal of humor and comedic relief to the story and grows into more than strictly comic relief by the novel's end.... So the bottom line is this: if you've enjoyed the first two Starship novels, there is no reason not to continue on with the story."
—SFFWorld

"The ability to write good space opera is increasingly a misplaced, if not entirely lost art, but Resnick knows how to draw on a hidden lode of it. … genuine fun."
—Critical Mass

"just the kind of sci-fi that I can see myself reading more of.... it's fun and it doesn't take itself too seriously. A clever blend of 'military sci-fi' and 'space opera' that is just the job for a trip into work or a lazy weekend. Seven and a Half out of Ten."
—Graeme's Fantasy Book Reviews

"Fast paced and entertaining….I'm still enjoying this series and am interested to see where Resnick is going to take the Teddy R. and its crew. So the bottom line is this: if you've enjoyed the first two Starship novels, there is no reason not to continue on with the story."
—SFFWorld