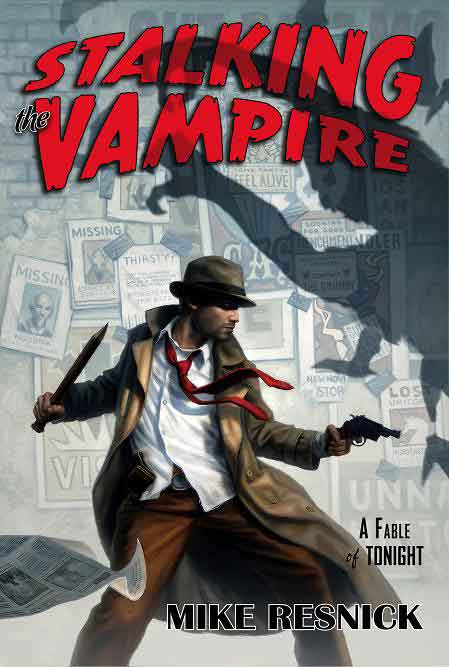 A Fable of Tonight A John Justin Mallory Mystery

It’s Halloween, and John Justin Mallory’s partner, Winnifred Carruthers, has been so busy preparing for the biggest holiday of the year (in his Manhattan, anyway) that she seems short of energy and pale. Mallory is worried that she’s been working too hard. Then he notices the two puncture marks on her neck…

On this night when ghosts and goblins are out celebrating, detective Mallory must stalk the vampire who has threatened his assistant, Winnifred Carruthers, and killed her nephew. With the aid of Felina, the catgirl, Mallory and Carruthers investigate clubs and lairs that only seem to exist on this one night of the year.

His hunt takes him to Creepy Conrad's Cut-Rate All-Night Mortuary, where he questions the living and the dead; to the Annual Zombies' Ball, to learn more about the undead; to the Hills of Home Cemetery, where the vampire sleeps by day; and to Battery Park, where all of Manhattan's bats come to feed and sleep. Along the way he meets a few old friends and enemies, and a host of strange new inhabitants of this otherworldly Manhattan.

Locked in an intriguing battle of wits with the millennia-old vampire, Mallory has until dawn if he is to save his trusted partner.

“Resnick's often-hilarious sequel to Stalking The Unicorn continues the offbeat investigations of PI John Justin Mallory, now a permanent resident of an alternate Manhattan....This time, his team includes Scaly Jim Chandler, a dragon with hopes of making it as a pulp author, and a vampire who prefers tomato juice to blood. Readers with a taste for supernatural whimsy will find much to enjoy here.” —Publishers Weekly

“Mallory remains a great character, the classic world-weary knight in trenchcoat armor, with a strong supporting cast…It's clear Resnick is having fun with the characters, setting, and mystery itself. Readers who enjoy a lighthearted caper through familiar-but-not territory will find this a pleasant read. Recommended.” —Gumshoe

“Resnick’s alternative Manhattan is a hoot with such well known landmarks as the Madison Round Garden and Vampire State Building along with less popular destination points like Hills of Home Mortuary, Cemetery & Deli. This sequel to Stalking the Unicorn features offbeat humor, amusing dialog and a zany cast of characters that is sure to entertain the most jaded sci-fi fan and spark plenty of interest in an emerging series.”
—MonstersandCritics.com