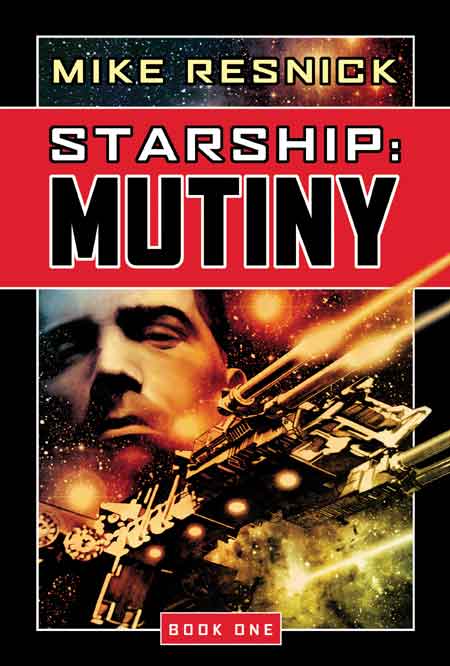 Book One of the Starship Series

The starship Theodore Roosevelt is fighting on the far outskirts of a galactic war, its crew made up of retreads and raw recruits. A new first officer reports, Wilson Cole, a man with a reputation for exceeding his orders (but getting results). He's been banished to the Teddy R. for his actions, but once there he again ignores his orders. ...

This is the first of five novels about the starship Theodore Roosevelt. The next four will be, in order, Pirate, Mercenary, Rebel, and Flagship.

"... on par with the best of Lois McMaster Bujold's Miles Vorkosigan series....Resnick is simply a consummate storyteller, and he's in top form here. Simply put: this is a space opera that hits all the right notes."
—Orson Scott Card's InterGalactic Medicine Show

"Resnick's reputation for writing two-fisted adventure has already been established, and Starship: Mutiny doesn't change that. Once again, the author demonstrates his ability to create characters several shades above stereotype, as well as fit them into a carefully conceived universe. Readers looking for an old-fashioned yarn will find this novel an auspicious start to a promising series."
—Starlog

"Mike Resnick is the king of intelligent space opera adventure. His future universe where the majority of his sf novels have occurred is superbly real, and characters, both human and alien, are the folk of legend. But despite this it never feels too out of the ordinary, there is a definite realism (accepting the setting aboard starships that is).... This is a book that I believe cannot help itself when it comes to pleasing all of Resnick's many fans, and is one I feel should win him some new fans along the way. This is book one in the adventures of Wilson Cole and the Starship Theodore Roosevelt, and a fine start to the series it is. I want book two."
—The Eternal Night

"The first of a proposed five-book saga set in his career-spanning Birthright Universe, Mike Resnick's Starship: Mutiny is just the kind of easygoing and unabashedly old-school space opera romp for which we've come to know and love him ... whip-smart, fast-paced pure entertainment ... simply pure escapism, impossible to resist by anyone who still remembers that good old fashioned sense of wonder."
—SF Reviews

"Resnick's writing is effortless, full of snappy dialogue and a fast moving plot.
The real delight to reading this novel is the banter and jokes in the conversations between Cole and the crewmates he does get on with, the insults and sarcastic comments with those he doesn't get on with, and the real feeling of camaraderie and society it creates. It's very easy to imagine this as a real world and setting because the characters act so naturally together....This was my first time at a Resnick book, so I had no expectations coming in. Needless to say, I was impressed. This is high quality work....There's a veneer of quality and above all believability that makes this heads above many space operas...it's damn good fun."
—SFCrowsnest

"Mr. Resnick isn't interested in playing textual games. He's interested in exploring the value of logic, the purpose of the military, the idiocy of both inflexible rulebooks and the where-the-wind blows populist press, and most importantly the potential for heroism."
—Ideomancer.com

"Resnick is thought-provoking, imaginative ... and above all galactically grand."
—Los Angeles Times