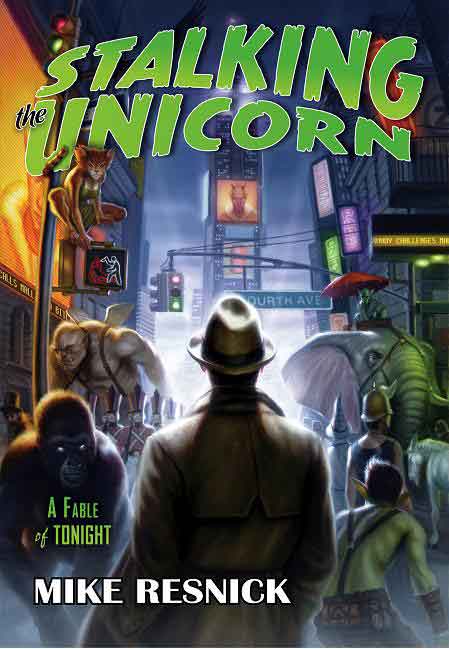 A Fable of Tonight A John Justin Mallory Mystery

It's 8:35 pm on New Year's Eve, and Private Detective John Justin Mallory is hiding out in his Manhattan office to avoid his landlord's persistent inquiries about the unpaid rent. As he cheerlessly reflects on the passing of a lousy year, which saw his business partner run off with his wife, he assumes the bourbon is responsible for the appearance of a belligerent elf. This elf informs him that he needs the detective’s help in searching for a unicorn that was stolen from his charge.

When Mallory realizes the little green fellow is not going to disappear with the passing of his inebriation, he listens to the elf's impassioned plea that the stolen magical beast must be returned to his care by daylight or his little green life will be forfeited by the elves’ guild.

Join detective Mallory on a New Year's night of wild adventure in a fantasy Manhattan of leprechauns, gnomes, and Harpies as he matches wits with the all-powerful demon "The Grundy" in a race to find the missing unicorn before time runs out!

“This enchanting blend of fantasy and hard-boiled detection, back in print after two decades, heralds a new series from prolific multiple-award-winner Resnick, best-known for his Birthright Universe series.... The crisp dialogue and imaginative setting will have many fantasy readers wanting to revisit Manhattan's magical side.” —Publishers Weekly

“…good fun…What's interesting about this book, besides the lighthearted tone and wry humor, is how it overcomes my usual reservations about fantasy by blatantly flying in the face of everything that normally makes me want to roll my eyes….A big plus of the book is the very likable Mallory….a fun story when all is said and done, and I give credit to the author for making a palatable fantasy novel that even this hard-case fantasy reader could enjoy.”
—SFSignal.com

“With a witty perspective on many aspects of city life, anyone who enjoys fantasy adventures in a more or less familiar urban setting will laugh their way through this wild entertainment.”
—Gumshoe

"Mike Resnick is a journeyman in a world of apprentices, one who knows his craft. His name on a book guarantees a solid story and believable characters, constructed with imagination and grace. Most importantly of all, it guarantees entertainment."
—Raymond Feist, of the Magician trilogy