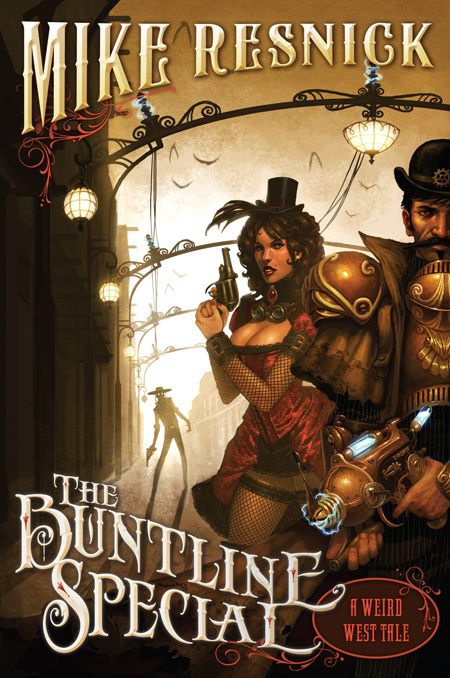 The year is 1881. The United States of America ends at the Mississippi River. Beyond lies the Indian nations, where the magic of powerful Medicine Men has halted the advance of the Americans east of the river.

An American government desperate to expand its territory sends Thomas Alva Edison out West to the town of Tombstone, Arizona, on a mission to discover a scientific means of counteracting magic. Hired to protect this great genius, Wyatt Earp and his brothers.

But there are plenty who would like to see the Earps and Edison dead. Riding to their aid are old friends Doc Holliday and Bat Masterson. Against them stand the Apache wizard Geronimo and the Clanton gang. Battle lines are drawn, and the Clanton gang, which has its own reasons for wanting Edison dead, sends for Johnny Ringo, the one man who might be Doc Holliday's equal in a gunfight. But what shows up instead is The Thing That Was Once Johnny Ringo, returned from the dead and come to Tombstone looking for a fight.

Welcome to a West like you've never seen before, where "Bat Masterson" hails from the ranks of the undead, where electric lights shine down on the streets of Tombstone, while horseless stagecoaches carry passengers to and fro, and where death is no obstacle to The Thing That Was Once Johnny Ringo. Think you know the story of the O.K. Corral? Think again, as five-time Hugo winner Mike Resnick takes on his first steampunk western tale, and the West will never be the same.

"A fast, fun and often amusing tale where Wild West meets steampunk... Told in a spare style reminiscent of a tale told 'round the campfire, The Buntline Special has a mythic feel. It's a modern-day Tall Tale with the requisite larger-than-life characters." —Miami Herald

"Brilliant. Scary, funny, often very moving. Left me wishing I could have shared a couple of whiskeys with Wyatt and Doc."
—Jack McDevitt, Nebula Award-winning author of Echo

"With great relish Resnick subversively refurbishes this notorious collection
of fact and embroidery…. a clever and refreshing do-over that
leaves the door ajar for sequels."
—Kirkus Reviews
"When does a Western stop being a Western and start be
ing something...else? Mike Resnick poses this question and others in his first foray into steampunk with The Buntline Special, a brilliant and humorously told tale about the Gunfight at the O. K. Corral… This book is just plain fun. Resnick does an excellent job with keeping things original and fresh… I loved this book… I could easily go for seconds. Highly recommended!"
—Shiny Book Review

"Mike Resnick has, in what I hope is the start of a new series, taken Steampunk from its Victorian England roots and plopped it squarely down into American Myth...[he] mixes in enough historical fact to make his alternate universe setting very real, with the steampunk elements like robots and electric powered stagecoaches fitting into the story without feeling forced...If you are looking for a story that is familiar enough to be comfortable, different enough to be unpredictable and good enough that I am hoping for a second helping, give The Buntline Special a try."
—DeLaneyGames Blog

"Mike Resnick is a journeyman in a world of apprentices, one who knows his craft. His name on a book guarantees a solid story and believable characters, constructed with imagination and grace. Most important of all, it guarantees entertainment."—Raymond Feist, of the Magician trilogy